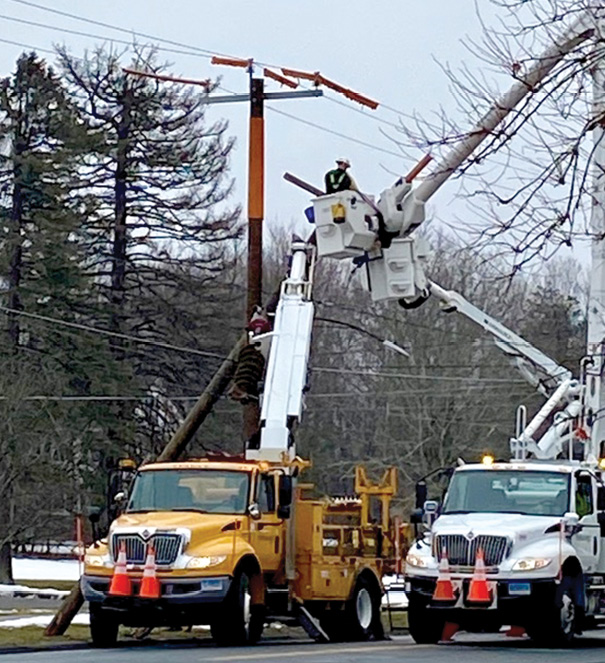 It took two Eversource bucket trucks and another with a grasper on the end, rather than a bucket, to transfer electrical power wires from a damaged utility pole to a new pole, detach the old crossarm, and temporarily tie the old pole to the new, all with the wires still hot.

Over a long period, Eversource has been replacing old utility poles in Suffield, and it was one of these new poles on South Main Street in front of St. Joseph Church that became engaged in a dispute with a stray car on March 1.  From the evidence left at the site and the subsequent scene viewed by our perambulating photographer, the car broke the pole off at the bottom, pushing that end back and leaving the pole held partially erect by its wires. The car also left a good deal of front end debris scattered about.

Surprisingly, the Suffield Police dispatcher advised that the car had left the scene when an officer arrived.

Traffic was totally stopped for some time while the Eversource crew installed a new pole and carefully transferred their wires.  The old pole, with a number of communication cables attached, was shortened and secured in place, awaiting other contractors to come and transfer the remaining cables.

Next Article
Spring Has Sprung
After a long winter, Suffield Parks and Recreation is excited to be…