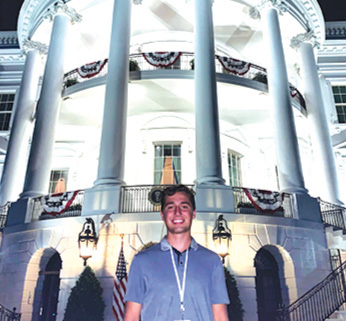 Kyle Englander, SHS 2019, is pictured under the Truman balcony when he was in the White House Internship Program.

Kyle Englander, a 2019 graduate of Suffield High School, knows how to turn the proverbial lemons into lemonade. A three-season runner at SHS during all four of his years with a 2018 cross country Class M title under his belt, he was also part of a record-setting 4 x 800 relay team which won the 2019 Class M State Open and New England indoor crowns as well as the 2019 Class M outdoor title.  After all that success, Englander was looking forward to running for Harvard. Life had other plans. After only 4 races with the Crimson, he fractured his femur and was sidelined. Although he prepared to run again, in early March students were told not to report back to campus after spring break due to COVID-19.

Seizing the opportunity to try something different, Englander applied to the White House Internship Program, which seeks to develop leadership skills and give young people exposure to the public service sector. He was accepted, and spent the summer working in the Office of the Staff Secretary which, among other responsibilities, manages the president’s correspondence. He was most surprised by the amount of responsibility interns were given which was commensurate, in many cases, with that which career civil servants were given. Englander reported that while templates are used in some of the common replies to constituents, the Gold Star letters to loved ones who have lost someone in the military are always originally written, and cited the letter to the parents of Dustin Doyon, a Suffield man killed in action, as an example of the office’s duties. The office also has responsibility for composing policy statements and White House addresses.

The internship was a real learning experience but not all work. Englander got to see history in the making every day, not only at the office but from his apartment which overlooked Black Lives Matter Plaza, home to numerous demonstrations over the summer. He attended a variety of White House functions, among which were the Fourth of July party on the White House lawn and the signing of the Abraham Accords (the normalization agreement between Israel, the UAE, and Bahrain),  also on the lawn. He brought his sister Hannah to a White House Christmas party and his father to a holiday White House tour. He also attended the COVID-19 Operation Warp Speed Summit.

When his internship ended, he was hired by the same office and worked through December. He was supposed to begin an internship with the Council of Economic Advisors on January 10. “Unfortunately, I was told on January 1 that the program was cancelled by the Biden administration. I was really disappointed since I’m an economics major and I had already signed a lease for an apartment,” reported Englander, who is now attending his Harvard classes virtually from home. Although the cancellation was a curveball, Englander is grateful for the opportunity he did have.

On the good news side, however, the change  will give him some breathing room. While working a full-time job, attending classes full time and participating three times a week in Zoom meetings as part of his Navy ROTC obligations, there was not much time to take a break. Englander didn’t mind that, though. He credits growing up in a small town and his family with having shaped him and his values and likes being busy. “My mother, especially, taught us the value of hard work, and I give the school system a lot of credit also for the success I’ve had so far. Growing up in a small town I received a lot of personal attention and met close friends who lifted me up and with whom I am still best friends today.”

Because his maternal grandfather was prominently involved in the Solidarity movement in Poland, the family had to flee the country and emigrated here when his mother Elle, was 16. (Ultimately, all but his mother moved back to their homeland). His mother appreciated what this country had done for her family and “she instilled in me the value of hard work, family, and a patriotic love of this country.” Englander believes that being a citizen here is a gift, and he wants to give back by becoming a Navy Seal officer. It appears that those values resonated with his siblings as well. His brother Ryan is enrolled in an eight year MD/PhD program at UConn with the goal of becoming an oncologist and his sister, Hannah, is a physiology and neurobiology major studying microbial interactions that confer antibiotic resistance. She will be doing an internship in the fall in the dermatology department of the National Institute of Health.

When asked if there is anything outside his comfort zone that he would like to attempt, Englander said he thinks it might be fun to climb Mt. Everest. I’m hoping that when that time comes, he will bring a copy of The Suffield Observer with him.

Next Article
Get Your Scholarships Here!
The Suffield Observer will sponsor two scholarships to Suffield residents who will…