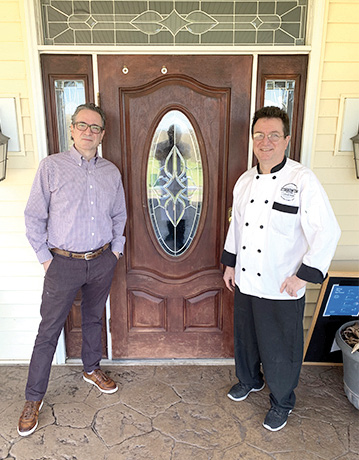 After an absence of 17 years, the Calvenese family is returning to the kitchen at the Suffield Country Club. Head Chef Vinnie Calvenese has been working diligently for the past two months ordering equipment and setting up the kitchen at the facility which will be called 341 North Main Street Grill and be open to the public. “We are a family run operation with nine of us on the payroll,” reports Vinnie, who will manage the back end of the restaurant while brother Don manages the front. For some of us old-timers, Andy, the family patriarch, will be a familiar face in the dining room on weekends. Starting out helping the family when he was 12, Vinnie has spent 44 years in the restaurant business and looks upon his time in Suffield as some of his best years. “I always thought that I would spend the last years of my career in Suffield,” said the head chef, “and we are excited to be back.”

The family had to find other work when Suffield Country Club closed the kitchen in 2003 to expand and renovate the clubhouse, a project which was scheduled to take the better part of a year. At that time Storrowton Tavern in West Springfield was looking for a concessionaire. The Calveneses applied for the job and were chosen over a multitude of other applicants.

The family has managed the restaurant and banquet hall at Storrowton Tavern since 2003 and will continue to do so. Vinnie does not see that impacting the Suffield facility negatively, as there is a long time full operational staff at Storrowton, where he has hired a Culinary Institute of America graduate to serve as head chef.

The Grill will be undergoing its final inspections in mid-April and will apply for a liquor license after the approvals are given. Vinnie anticipates a soft opening for Country Club members to “get out the kinks,” after which, two weeks later, the facility will be open to the public.

Although the hours of operation are scheduled to be 11:30 a.m. to 3:30 p.m. for lunch, followed by dinner from 4 p.m. to 9 p.m., Calvenese reports that the demand will dictate how late the restaurant stays open. At present, he states that the last reservation will be taken at 9 but that is subject to change. Likewise, the plan is to close the Grill on January 1 and reopen on March 15, but that is not written in stone either. “If the numbers demand it, we will stay open,” says Calvenese.

The set menu is diverse, with something for everyone. It will include fresh salads with various proteins, soups, chicken, steak, seafood, Italian specialties, and prime rib on Thursday to Saturday nights, as well as nightly and seasonal specials.

Once in operation, the restaurant will be available to host a myriad of events such as showers, birthday parties, member guest tournaments and holiday parties. With the back outdoor patio overlooking the golf course and the setting sun, the Grill will be a lovely addition to dining in Suffield.

Next Article
Annual May Market Coming! Save the Date – May 15
The Suffield Garden Club members cordially invite you to celebrate spring with…