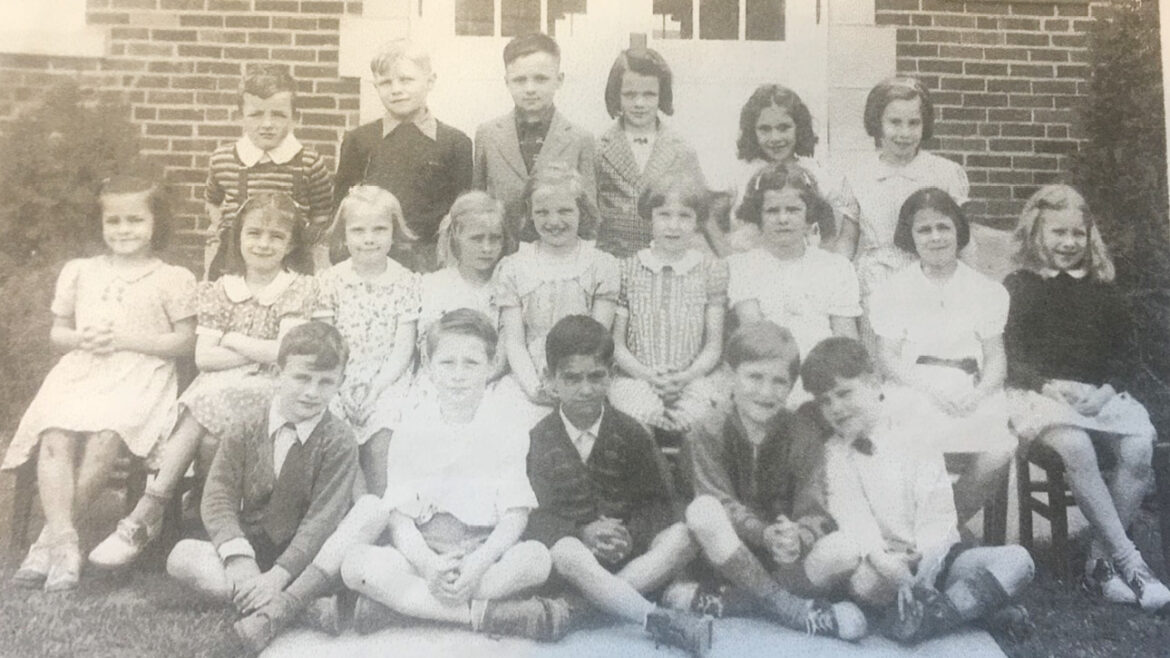 East Street School had two rooms. It served the community from lower Thompsonville Road to River Boulevard. Just two teachers taught six grades when Alice Dudek Czyz and Frances Matyskiela Rumore attended. The rooms were on either side of a central corridor which led to the cloakroom and toilets. The west room contained grades 1-3; the east side was grades 4-6. Accessible to the children was a gigantic paper cutter. Visions of sliced fingers still haunt Alice.

Miss Godfrey was a teacher both remembered. She taught the younger children, but when Alice’s class graduated to the fourth grade, Miss Godfrey graduated too. Perhaps, as Alice suggests, Miss Godfrey liked the class too well to give them up. Fran Matyskiela lived close to the school. At the first morning bell, she ran through backyards to climb over the school fence. By the second bell she was in her seat, on time.

Fran and her friends performed plays in her backyard playhouse. The kids sold two-cent tickets for the plays, but no one came. One day, Fran invited Miss Godfrey to visit. To get to the playhouse, one had to walk through the chicken yard, sidestepping droppings. Miss Godfrey, Fran recalled, didn’t complain.

The classes consisted of the children of immigrants from Poland, Italy, Lithuania, Greece and Yankees, but no Hispanics or Blacks. Some children attended who, at first, spoke no English. Fran spoke English when she began school, but Fran’s older brother and Alice didn’t. He had to repeat the first grade. Alice did not. The children felt no discrimination. Later, in high school, Alice was told she would never be a valedictorian because she was Polish. Still, a few years later, Connie, Fran’s younger sister, was the valedictorian for her class. Perhaps she benefited by playing school with Fran!

In her fifth year, Fran was bused to Bridge Street School because, presumably, there were too many children in the school. She returned to East Street School for the sixth grade.

Although Fran learned a lot at the school, Alice learned very little. She doesn’t blame the teachers. They were distracted by the non-English speaking students, the different ages and aptitudes of the children. One day, Miss Godfrey asked who knew the name of the first English child born in America. She didn’t think anyone would know, but Alice did. She knew the answer, not because of a book, but because of Virginia Dare maple syrup. Older children, like Alice and Fran, were expected to tutor other students. No homework was given. Cursive handwriting was taught. Left-handed children were forced to become right-handed. Miss Wolfe taught music once a week but there was no art, no exercise. In the school were bullies, who should have been sent to reform school. It helped to have an older brother in your class during the unsupervised playground time.

Alice calls her school years the time of “zero parental oversight.” Parents never complained to the teachers, nor did they ask about grades. Kids were mostly unsupervised when school ended. Often, after school, Alice and her brother walked over the old Thompsonville bridge to the beauty salon where their mother worked. Then they went to the movies until their mother finished work around 10 p.m.

The school offered no lunch. Some students, like Fran, ate at home. Alice and her brother brown bagged it, partly because no one was home. Everyone was working.

During World War II, children knit scarves and afghans for the soldiers. Food was rationed but some stores were more flexible, depending on the circumstances. Holes in shoes were plugged with cardboard. The Bigelow mill in Thomsonville, the largest employer, manufactured war necessities. Work hours were long. Alice’s mother learned to drive because her husband expected to go to war. Being a skilled machinist, he didn’t go.

Neighborhoods were friendlier back then. Fran knew everyone on both sides of the street, a mile in each direction. Some people didn’t lock their houses. The kids collected pollywogs and fireflies while roaming barefoot in the summer. They skated on Tavino’s pond. Skating onto an iced diving board, they flew over the ice before crash-landing. They sledded down Burbank Avenue’s dirt surface. The ragman came. Mr. Tavino delivered vegetables in his truck. Mylek’s Bakery delivered delicious jelly donuts. At Papafil’s, a nickel bought a lot of candy. Everything else was in Thompsonville. It was a quick walk over the bridge to the movies, the library, Penny’s, beauty salons, church… There was no need to go to Suffield center. It was too far away and too small.

Next Article
Rotary Student of the Month
Congratulations to Samuel Petrucci, Class of 2021 at Suffield High School, on…