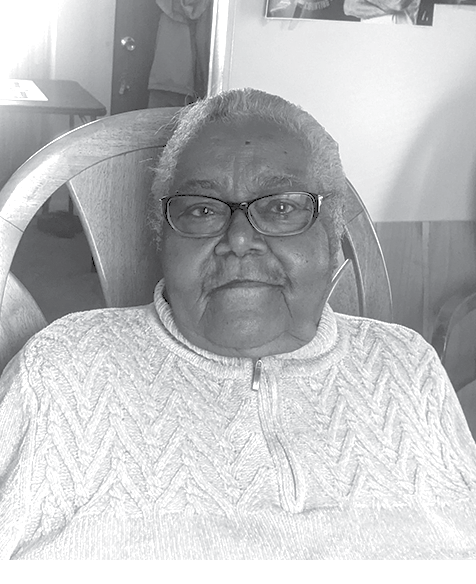 For most of her life, Betty Arnold has lived in Suffield. Hers is one of four Black families who live on Kent Avenue. In years past, Kent Avenue and Ellison Street were where many Blacks lived, all within a half mile or so. The concentration of Blacks in this area, according to Betty, was because few real estate agents showed them houses anywhere else. When she was growing up, only two White families lived on Kent Avenue. Now there are many.

Betty is also descended from Native Americans. Her mother (Grace Jubrey Van Allen) recalled that, when visiting her grandparents, she used to sit in a circle, Indian-style on the floor, for meal times. Betty’s great grandfather, Bert Jubrey, owned a lot of land in Windsor Locks on a street still called Jubrey Lane. He raised the first $300 to found the Third Baptist Church in Suffield.

Betty graduated from high school in 1953. Throughout her school years, she walked to school. She believes that students who lived in her neighborhood were not transported to school by bus until Jordan Morgan and Philip Johnson, both Blacks, became school bus contractors. She felt discriminated against because of the color of her skin. One woman in town always called her “crow” despite knowing her name. Betty ignored her, but when a fellow student called her that name, she hit him with her lunch pail. She remembers with pride when the first Black teacher, Miss Valentine, was hired to teach in the Suffield high school in 1956. Betty still bristles when recalling an incident that occurred on the Suffield Green about 40 years ago. Five or six white robed and hooded figures handed out flyers, presumably Ku Klux Klan literature. When asked about the Black Lives Matter protests, Betty said she abhors violence, but she is adamant that discrimination must end. Her family never talked about the prejudices they endured. Now she believes it is time to speak up.

Her family’s life revolved around the Third Baptist Church. The church provided spiritual and recreational needs. Not invited to White gatherings, the Blacks provided their own. At Halloween and other holidays, the church elders entertained the children with treats and games. The church had an excellent choir and often traveled to other churches to sing and meet people. Since Betty was related to most of the Blacks in town, she sought elsewhere for a date for her junior prom. She picked a boy from Hartford who also sang in his church choir.

In high school, Betty was an honor student all four years, yet she was unable to get a job in Suffield, including at one of the banks. Even in recent years, Betty feels that job discrimination endures in Suffield. Her niece, who worked at a bank for three years, was the first to be dismissed when the bank was bought by PeoplesBank. To get hired, most Blacks had to go to Springfield or Hartford. Betty traveled to Hartford. She worked at Travelers Insurance, then Royal Typewriter and Kaman Aircraft before settling with the Federal Reserve Bank of Boston, where she worked for 28 years.

Betty married twice. Her first marriage, at the age of 20, lasted 13 months. At 49, she married again. This time she married a good man, Joshua Arnold, from Georgia. When she told him that she would never marry a man who was not a churchgoer, he went to church the next Sunday. He got baptized, stopped smoking and drinking and was the president of the church choir for years. He raised a huge garden. Each year, he piled the excess vegetables into his car and distributed them freely at the church. He has since passed away.

In The Suffield Observer’s February 2004 issue, Jane and Sam Fuller penned a profile of Betty. They called her “Suffield’s Surrogate Mother.” The article was prompted by Betty’s volunteer work beginning in 1966 with Project Concern, a program which bused children from Hartford to attend suburban schools, including Suffield’s. She “adopted” two of those children, mentoring them, transporting them to after-school activities and providing them with a home to stay in one night a week and on the weekends when necessary. She spent five years in the program until her work prevented her from continuing. In those years, Betty worked nights, so she was often sleep deprived. In other years, she ran a preschool with Dara Johnson at the church. And for many years, she worked as a nanny, even after retiring, until last March, when she became ill. She is better now. As spring awakens, she is awakening too. She is getting out, driving and caring for her community and family.

Next Article
Suffield Polish Families – Immigration Stories
In the early years of the Polish Heritage Society (PHS), many members…