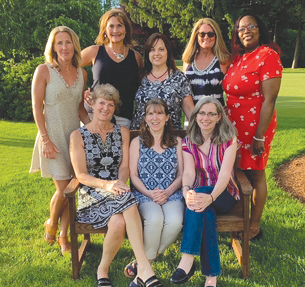 It is said that many hands make light work. Conversely, when only a few step up to answer the call to volunteer, the same small group has to labor all the harder. After a while, folks get tired, and worthwhile organizations fold. So it has come to pass that the Friends of Suffield (FOS) is calling it a day with this September’s Suffield on the Green (SOTG), their signature event.

President Becky Tobiasz has been working hard to find an organization(s) that will take the reins and continue the beloved Suffield tradition. “A few organizations have expressed an interest, and I am confident that at least one of them will come through,” said Tobiasz. Although the FOS voted to disband in May, the formal dissolution process will take place at their annual meeting on June 17, at which time they will also vote to select an entity to take over SOTG from any choices they might have. They will run SOTG for their last time on September 11 and 12, 2021, and all money raised will go to Suffield Community Aid once the bills are paid.

The FOS has a storied history. It is a volunteer 501(c)(3) charitable organization whose mission is to foster a sense of community in Suffield residents, engage in civic service and promote projects and programs that enrich the town. And enrich the town they have – not only through the programs they have run, but also through their grant program which disperses the funds they make at SOTG to worthwhile projects in town. One would be hard pressed to find a group to which they haven’t contributed. From Boy Scouts to church groups, the library to Little League, sports groups to the FFA, FOFAH to the Suffield Players, the Woman’s Club to Citizens Restoring Congamond and numerous other groups, all have been helped by the FOS to the tune of over $330,000 in the 35 years they have been in existence. In 2019 alone, they contributed $18,000 to 18 Suffield organizations.

Their annual events included the Senior Valentine Social, complete with king and queen; an Easter egg hunt and photo op with the Easter bunny; a Halloween event; a Christmas tree lighting on the Green; and arranged visits from Santa to Suffield homes.

Even during 2020 when the world seemingly shut down due to the coronavirus, the Friends held a Valentine social of sorts by providing meals and a little gift bag to seniors, sponsored chocolate making, an Easter-bunny-drive-by, fireworks, a canine contest, and a Santa-drive-by and give-away.

By way of history, it is interesting to note that the FOS began as the Jaycee Wives in 1965, a group that helped their husbands with various fundraisers. In 1971 the Wives ran a craft fair during the Jaycees Octoberfest fund-raising celebration, with professional crafters showing their wares first on the middle green and then in the Hatheway House and barn.

The format in 1971 included bingo, a children’s parade, a polka party, and a pancake breakfast. In 1980 the Jaycee Wives changed the date of the event from October to September and in 1981, the Jaycee Wives organization became the Suffield Jaycee Women, a name which lasted until 1985 when the Friends of Suffield became the new name.

Tobiasz thought the FOS might be able to make a go of it, as they have picked up seven new members since 2019, but she said it has been difficult to recruit someone for president: “People are willing to help but no one wants to lead the organization.” Lori Sych, a member since 1995 and former president, agreed: “We have a lot of members who will work their tails off but are uncomfortable leading the group.”

Both Tobiasz and Sych say they will miss the friends they have made and the fun they have had giving back. Although sad about the dissolution of the FOS, Tobiasz is hopeful that SOTG will continue in some form, and she knows she will come across her FOS friends doing good works for other organizations.

Next Article
Senior Center & Mini Bus News
Welcome back! It is so exciting to be able to be open…