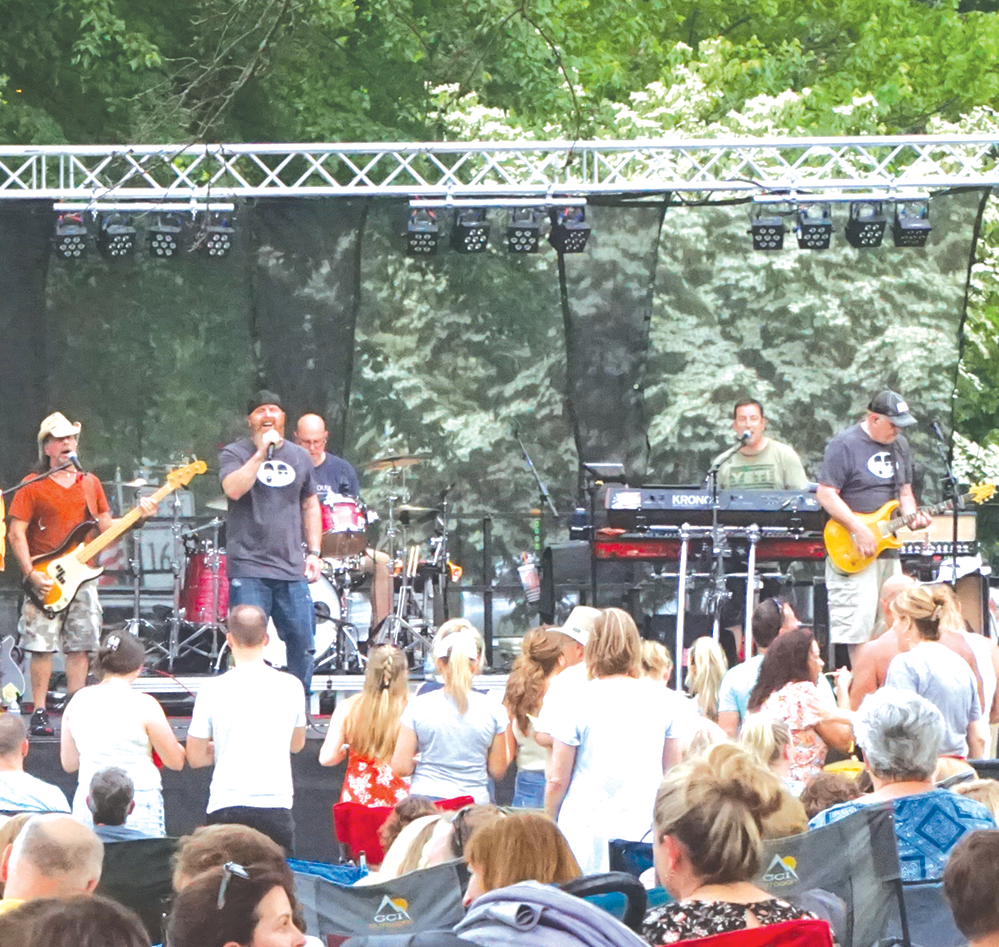 Vocalist Joe Fazio shouts it out as a locally popular band called Trailer Trash entertains on June 9, when local impresario Josh Friend presented the first of a bi-weekly series he is presenting on the Green in celebration of the tenth anniversary of his Suffield Music studio in Suffield Village.

Well, few were moving hard to the music, but it was indeed a big crowd, estimated to approach 400, that came to hear – and watch – Trailer Trash. The popular band always draws crowds, mostly in Western Massachusetts and North Central Connecticut. Local impresario Josh Friend had erected a big stage near the south end of Middle Green, and the informal seating extended north past the bandstand. Rain showers had been predicted, and there were light sprinkles in the afternoon, but there was a good crowd when the music began near the scheduled 6:30 p.m., and more arrived as the music played. The last piece ended well past the scheduled 8:00.

The crowd, many of whom brought coolers as well as chairs, was a mixed-age batch of enthusiasts, with perhaps a concentration of baby boomers and gen Xers but a fair number of millennials were gathered up front in what would have been a mosh pit if it were indeed a pit. The standees really enjoyed the rhythm, though their movements were muted.

Josh introduced the concert and explained that he was producing a series this summer as a gift to the town, celebrating the tenth anniversary of his Suffield Music studio in Suffield Village. His concerts are scheduled every other week on Wednesday evenings, between Suffield Parks & Rec’s bi-weekly series. Josh’s first, Trailer Trash, has evidently played many styles, but he had mentioned country rock. This reporter is not qualified to evaluate, but he found the rhythm infectious and the concert entertaining. Perhaps the “country” was there in the lyrics.

Josh had set up a table on one side of the crowd with information about the Suffield Music studio, which is located on the lower level of the Village, where instruments and repairs are offered and a number of teachers hold sessions in sound-insulated rooms.