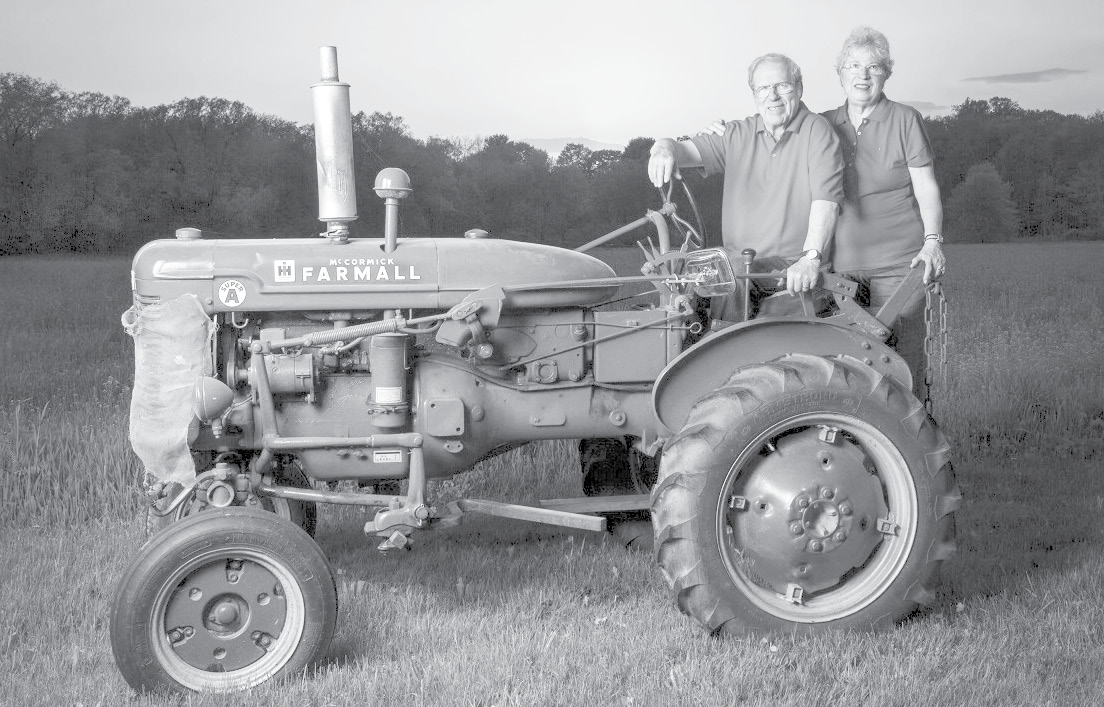 Bill and Lin Remington are pictured in their back yard.

Many Remingtons, now twelve generations in Suffield, live on River Boulevard. In 1679, Thomas Remington, Senior was awarded four land grants for him and three of his sons, two of which were located on Feather Street (now East Street), the other two on what is now North Main Street. A family saying is “Remingtons don’t move out, they move next door.” Bill Remington is just a neighbor away from other Remingtons. His spot is a little piece of heaven, also home to Remington Greenhouses, where once an orchard stood and 200 sheep grazed. Bill retired from farming and the greenhouse business this May, after sixty-two years.

Even at seven, Bill had his hands in soil. His Uncle Harold, long-time Suffield Town Clerk and plant grower, threw some puny geraniums onto the compost heap. Bill planted them in the backyard with tobacco fertilizer and horse manure. The plants thrived and were noticed by his uncle and father. They were brought into the greenhouse before the frost to serve as stock geraniums for the next year’s crop.

When Bill was growing up, Suffield was rural. There were dairy farms nearby and all available land was dedicated to tobacco. George, Bill’s father, was a production control supervisor at the Bigelow Sanford Carpet Mill in Thompsonville. He also grew tobacco with his brother Harold. Bill worked for his father and uncle but also began working for others as he was only allowed to pocket the last week of the summer pay he received from his family. The rest went into the bank. From that time forward, Bill worked multiple jobs, sometimes three. One wonders when he slept and how he raised a family of three children (Sharon, Jim and Amy) with his wife, Lin, a nurse.

Bill worked for Burton Sikes, who never owned a tractor; he farmed with horses! When Bill was fifteen, he worked for Spaulding Gardens. Spaulding had a contract to grow the grass and set up the spring flower show at Eastern States in West Springfield. Bill laughs, recalling that his parents didn’t believe him when he said he had to mow the grass in the greenhouse. His interest in greenhouses began at Spaulding and at Slatter’s Greenhouses in Springfield, where he worked during high school and after graduating from UCONN with an agricultural degree.

Bill continued to work in tobacco, milked cows, joined the Air National Guard and worked at Wickes Lumber. He began his own business, at first planting tomatoes (500 of them!), potatoes and annuals. Later he grew cut flowers, perennials and foliage plants, selling at the regional market and to florists. At the same time, he painted the interior of his new house. He had little time to spare. When the children came, he made up a game of mixing the potting soil ingredients. The children played while they worked, and Bill was able to do something else. Adding water to their mixture increased the fun when it explosively expanded the soil.

Later Bill became a dairy supervisor at the Connecticut prison farms in Enfield and Somers. When the herd was sold in 1977, it was known for its impeccable bloodline due to Hilltop Farm’s pedigreed bulls. The cows were bought by farms all over the country. That same year, Bill became the manager of the prison farm. In 1989, he retired and ran his greenhouses full-time.

Bill remembers. He talks of the flood of ’55 when river water swirled just ten feet from the road; neighbors helping one another; Pluto’s liquor store; Papafil’s general store; Kolikowski’s gas station, which became Krupa’s; the hermit of Suffield; and having the 745 Enfield telephone exchange instead of Suffield’s 668.

Until the fifth grade, when he attended Bridge Street School, Bill only knew the children who had attended the East Street School with him. In sixth through twelfth grades, he attended Suffield High School (now McAlister Intermediate School), which included junior grades as well, with West Suffield kids added to the mix and much bigger teenagers. It was a tough first year. He remembers Mr. Greenleaf, his teacher, saying “Straighten up and fly right.” Also, Greenleaf’s precise aim with the chalk when kids were talking while his back was turned. In the fall, during tobacco damp, when it was raining and the air was damp enough to take down the tobacco from the barn poles without crumbling the leaves, the teachers understood and did not assign any homework. The students would be working through the night.

Bill also remembered his friend Eddie Ridel, who, under Bill’s guidance, became a greenhouse grower full-time. Working in the same business, they collaborated, purchasing supplies and plants, attending vendor meetings together and sharing a friendship. That was the way of East Suffield.

Next Article
Suffield, We Have a Problem
A year has passed since George Floyd’s murder spurred our nation into…