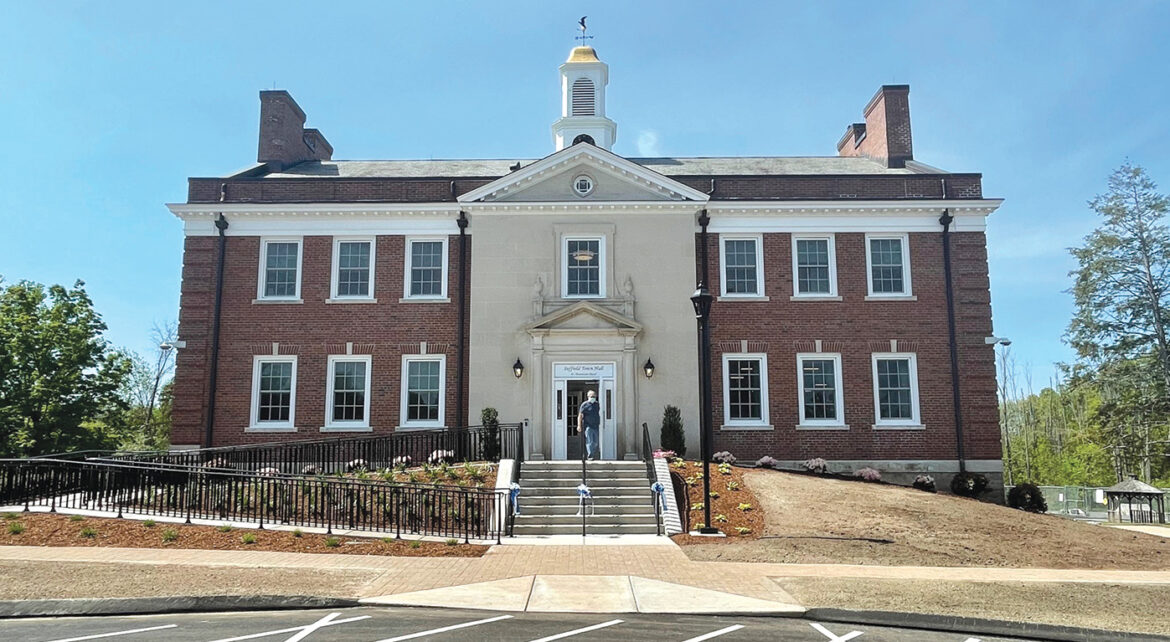 Suffield’s 1962 Town Hall stands proud with its new ramps at the left and great new facilities inside.

It’s been a long haul, if you count all the early discussions of new office layouts or new building designs, but the continuing need for improved quarters for the Town Hall staff persisted, and the happy end of the struggle has arrived. First Selectman Melissa Mack is understandably elated that the actual construction work for the renovation finally settled upon was completed on time and under budget.

As is her custom, First Selectman Mack began the May 17 reopening ceremony with a joint recitation of the Pledge of Allegiance, and a small ensemble from the Suffield High School marching band played The Star Spangled Banner. During her opening remarks, she reviewed 26 years of talking and planning as the Town attempted to bring the aging building, opened in 1963, up to a modern standard for an efficient staff. She told of diverse considerations along the way, including concepts for a new building. The timing of the project was also affected by the library renovation, with its longer-than-expected use of the Ffyler Place swing space needed for the Town Hall to be evacuated.

Mack named a great many of the individuals involved in the final project, including Q. A. & M. architects and Gilbane Building, the general contractor, along with Town employees and volunteers, thanking them all for carrying the controversial project to an excellent result. Then she cut the ribbon strung across the front steps and invited everyone to tour the building. Many did.

To this observer, the building looked very new, with more space in the offices than expected. Almost all of the furniture was new and in keeping with new conventions of digital equipment. The new meeting room, occupying the entire west end of the first floor, was impressive, with about 50 stackable chairs laid out and an L-shaped row of tables at the front end for board and commission members. Mack had pointed out that the room was well equipped with electronic substructure.

In many of the offices, staffers had settled in well; all seemed very pleased with their facilities. Having been there only a few weeks, some had not quite finished arranging their spaces and many walls lacked decorative or informational items. Town Clerk Kathy Dunai, who had a new larger vault to arrange, still had some shelves to fill. Her office, heavily digital now for several years, will offer even more digital services, with original files available only when necessary.

Some final tasks had been accomplished after Town staff had moved in, most noticeably the final repaving of the driveway and parking lots and completing the installation of the decorative railings at the front steps and accessibility ramps. Top soil was spread and seeded in mid-May, and attractive plantings were installed. The controversial main lobby chandeliers were finally in place. (Early proposed designs had seemed unacceptable; the chandeliers finally chosen looked totally satisfying to this observer.)

Next Article
The Joy of Suffield Farm Stands
As you drive around Suffield, not only will you see the trees…