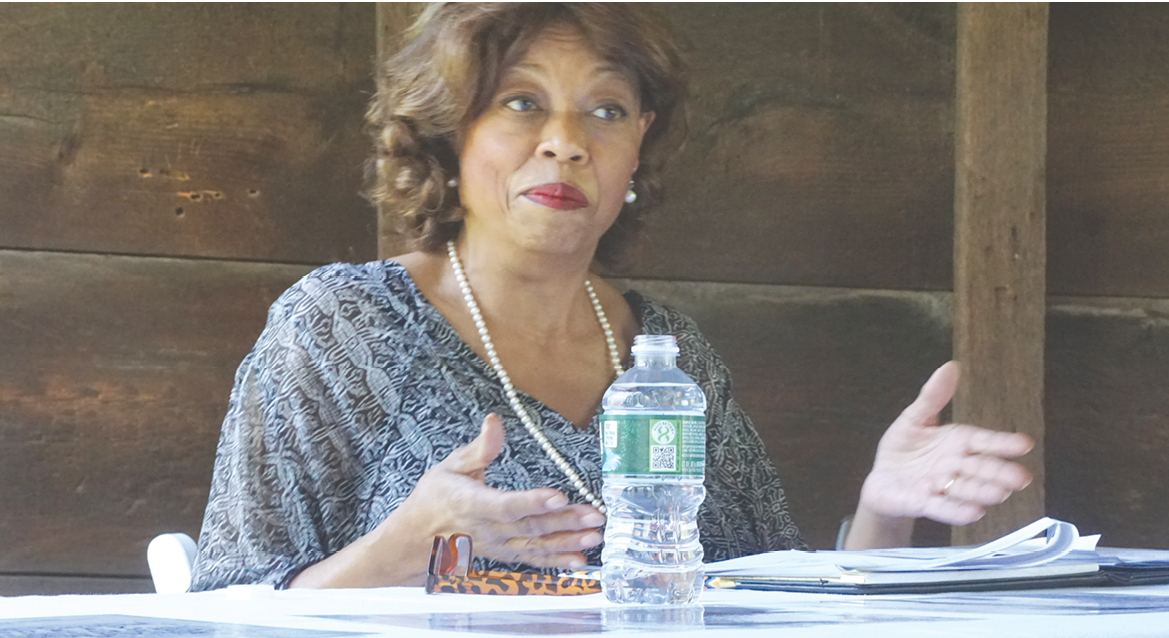 In June, I witnessed an amazing dialogue. For two days, the Phelps-Hatheway House hosted two programs, both featuring Joe McGill, a national figure and founder of the Slave Dwelling Project. The hook for the Project is ingenious. McGill sleeps in slave quarters for a night. He has done this at 150 sites in 25 states so far. He does not review how comfortable a slave bed is. The point of his sleepovers is threefold: to preserve former slave dwellings; lift slavery from the footnotes of history; and engage his audience in a thoughtful, non-combative discussion about slavery, racism, race relations and racial equity.

We were engaged! So engaged that both programs ran overtime. The second day was a panel discussion when McGill was flanked by Dennis Culliton, Founder and Executive Director of the Witness Stones Project and Pat Wilson Pheanious, Co-Chair of the Witness Stones Project. Suffield will soon be placing a witness stone for Tamer, an enslaved woman, purchased “as a slave for life” when she was seven by Luther Loomis who lived at the corner of Bridge and Main Streets.

As a whole, we northerners have been slow to recognize that slavery happened here. In our small town, 37 people were enslaved in the 1774 census. The purpose of the Witness Stones Project is to restore the history and honor the humanity of the enslaved who helped to build our communities. Making the stone visible, particularly in a place associated with the person, serves as a teaching tool. To date, the Witness Stones Project has brought the lesson of slavery to over 2,000 students in more than a dozen communities in three Northeastern states.

McGill, Culliton and Pheanious do not want to rewrite history. Moreover, the history of slavery cannot be disputed. It’s in documents, census and church records, diaries, letters and other primary sources. Unfortunately, many of the documents have been ignored, glossed over, relegated to a footnote and absent from our classrooms. We are afraid to talk about racism and yet we must. Making this submerged history visible is the first step and a good way to start an intelligent conversation.

The purpose of all this talk about race is to reveal the inequities, end discrimination and live in harmony. Positive dialogue is not meant to instill hate and guilt or punish people for sins they did not commit. Respectful conversations can clear the air and untangle the visible and invisible threads of discrimination which still exist. Our town benefited from the enslavement of Tamer and others. Luther Loomis and other Suffield residents were directly involved in the lucrative West Indies triangular trade which brought prosperity to the town. We should acknowledge that. We should also acknowledge that there are still inequities. Our future depends on it. We cannot go forward by erasing or ignoring these things.

The audience connection to Joe McGill and the other panelists was electric. There was much sharing and disclosures. One of the participants who manages a house museum in Massachusetts, told the group that white Civil War soldiers who had served with black regiments had that part of their military records erased by a 19th century archivist. Pat Wilson Pheanious recalled a school assignment in which the students were told to do a project on the origins of their family in America; for instance, they could write about their family coming over in the Mayflower. As a black person, Pheanious had no knowledge, beyond a few generations, how her family came to the country. When revealing this to the teacher, she was told to pretend she was just Italian and make something up. Her experience is wrong in so many ways. She felt marginalized, different and small. Her history was invisible. Later, as an adult, she found out that she had an ancestor who fought, while enslaved, for America during the Revolutionary War. She had a stake in this country, it is her country. She felt proud.

Talking about race can be healthy, open and refreshing. It can also be complicated and difficult. To me, those two programs were a revelation. More people should experience programs such as these. It’s possible. Let’s end the civil war and be as one.