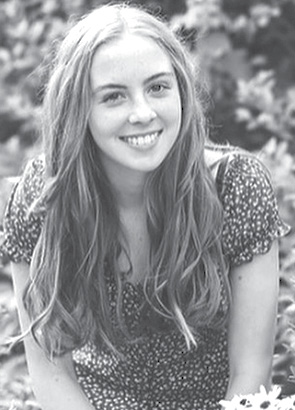 Congratulations to Haley Young, who was selected as the Rotary Student of the Month for May. Haley is a senior at Suffield High School and a member of the National Honor Society, as well as the World Language Honor Society. She has been involved in the Science Fair Club throughout her years at Suffield High School and was President her Junior and Senior years. In sophomore year Haley received a special scholarship award to Tunxis Community College for her project on solar energy. She won 3rd honors at the fair. Haley has also been a member of the Suffield Sustainability Council, where students organized the Climate Strike and Black-out Day to show support for the nationwide movement. She has been a member of Student Senate and Class Council, and was also part of the Giraffe Club, where students “stick their necks out to help others.” She has also been part of the Wildcat Advisory Group, a group of students who volunteer to help 8th graders transition into high school. Within this group, Haley also created a COVID-19 procedure video for the school to show at Freshman Orientation. Haley was chosen for the Rotary Youth Leadership Award in 10th grade, where she attended a day- long leadership training program. In her senior year, Haley has been part of Peer Tutoring, which is a group of students who give up their study hall periods and time after school to help tutor students.

Haley has been on the Varsity Cross Country Team and the Indoor/Outdoor Track Team throughout her years in high school, selected as captain her senior year. She has excelled in her athletic achievement by earning the All-Conference Award four years in a row. Haley earned All-State during her Senior Cross-Country season and placed second in the NCCC West Championship Meet. She has received the Rookie of the Year, the Rising Star Award in 9th grade, as well as the Joe Sinicrope “All-In” award for commitment and dedication. In addition, she was named Scholar Athlete all four years of high school.

Haley has received many awards such as the AP Scholar Award, the AP English Language Award, an Engineering, Design & Materials Award, the Philo T. Pritzkau Progress Award for Excellence in Pre-Calculus and again for Algebra II, the Mathematics Department Award, and the Art Department Award.

As you can tell by Haley’s impressive resume, it is clear why she was chosen as the Rotary Student of the Month.

Congratulations to Connor Shaw, who was chosen as the Suffield High School Rotary student of the Month for June. Connor is a rising senior at Suffield High School and is an honors student. He is a member of the National Honor Society and the World Language Honor Society and is is the Vice President of his Class Council. He has been involved with planning events such as Spirit Week, the prom and Trivia Night fundraisers. He is also on the executive board of Interact Club, a junior Rotary Club whose motto is “Service Above Self.” The club performs service projects to help their school or community. Connor is also a member of Best Buddies. He represents the Suffield High School student body at Board of Education Meetings. He communicates with the student body and gets their feedback to relay to the Board. Connor states, “I am proud to be the Student Representative to the Board of Education. It has allowed me to grow as a person and step out of my comfort zone. This role has proven to help me stay organized and plan ahead.”

In Connor’s spare time, he has volunteered with Turkey Drives for his church, has helped to hang up Christmas lights and participated in the Union Street Tavern Trot; his favorite volunteer experience is the Knights of Columbus Christmas party. Connor also enjoys helping one of his friends with his Eagle project, a project is building a flag retirement location at Sunrise Park.

Outside of school, Connor is involved with OWLs, the Outdoor Wilderness Leaders group.

Connor is looking forward to his senior year and is excited to continue doing more great things next year. Congratulations, Connor!