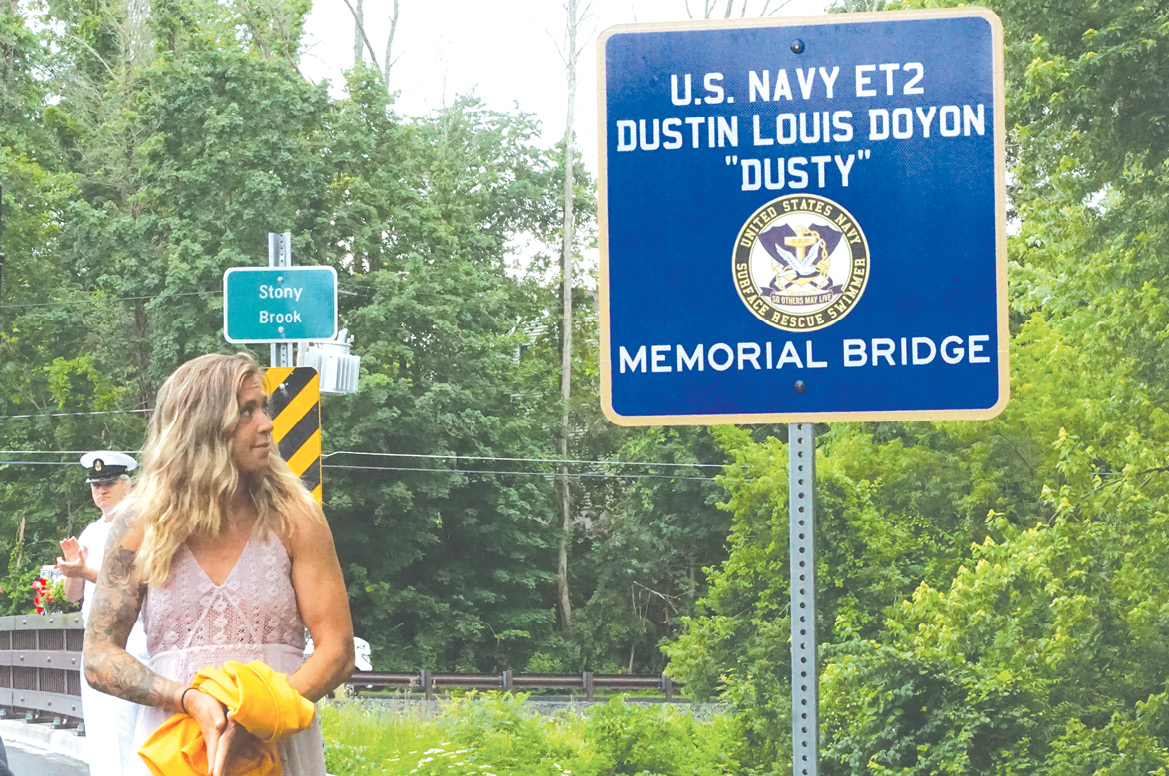 Annette Doyon looks thoughtfully at the sign she had just unveiled following the official statement by First Selectman Melissa Mack honoring her brother Dustin. Their father, Brian Doyon, unveiled the sign at the other end of the newly-named bridge.

Mother Nature smiled on Suffield Saturday morning, June 12, and the ceremony dedicating the new Remington Street bridge began in just a few drops of rain, which soon stopped. The bridge now honors and memorializes our town’s latest military casualty, Petty Officer Dustin L. Doyon, U. S. Navy, who died in the South China Sea when the destroyer John McCain was rammed by a Liberian tanker in 2017. Doyon was rated as an Electronic Technician, Second Class, and also qualified as a rescue swimmer.

The very well-planned and well-attended ceremony began with First Selectman Melissa Mack’s welcome. The Navy participated significantly, with a five-man color guard and a four-man rifle drill team performance, both from the Navy Submarine School in Groton. The Navy also provided an impressive flyover from a fighter squadron in Virginia.

After a blessing by Fr. Mark Jette of Sacred Heart Church and a prayer to St. Peter sung by Glen Joyal of that church, SPD Police Chief Richard Brown led the Pledge of Allegiance; then First Selectman Mack spoke. She said she had never been more proud of Suffield than when the town responded, lining the streets with such love and support as Dustin made his final journey through town. Addressing the Doyon family, she quoted Khalil Gibran: “When you are sorrowful look again in your heart, and you see that in truth you are weeping for that which has been your delight.”

State Representative Tami Zawistowski read a document from Governor Ned Lamont with his proclamation that June 12, 2021, was Dustin Doyon Day in Connecticut.

Music was an important part of the ceremony. State Troubadour Tom Callinan sang his “Some Gave All, All Gave Some” piece about military sacrifice. Most impressive was a nice ballad he composed specifically about the Dustin Doyan Bridge, sung in duet with Glen Joyal.

Following First Selectman Mack’s pronouncement of the official naming and dedication of the Dustin L. Doyon Memorial Bridge, Dustin’s father Brian and his sister Annette unveiled the new signs at each end of the bridge. And Karen Doyon, Dustin’s mother, spoke from her heart about a boy and a young man whose life followed the biblical quotation, “Love One Another as I Have Loved You.” She thanked everyone who contributed to the tribute just proclaimed.

Then the recorded voice of Judy Collins singing “Amazing Grace” filled the air, and as the recording ended, a Navy A/F-18 Super Hornet attack fighter jet zoomed across the scene from the southwest, just under the low cloud ceiling. It was a powerful punctuation to a great ceremony.

The story of the flyover is itself worth telling. The jet was from Strike Force Squadron 103, from Virginia Beach, near Norfolk, Va., whose Executive Officer, Cdr. Jason Papadopoulos, was a 1997 graduate of Suffield Academy. The plane was flown on June 11 to MacArthur Airport in Islip, Long Island, so it could make the flight over Suffield the next morning. There would have been two A/F-18s, had there not been the low cloud cover. William Moryto of Suffield, Lt. Col. USMC, Ret., who helped coordinate the flyover as the jet approached, forwarded this comment from a member of the two-man flight crew, Lt. Gregory “Willy” Riddell:

“It is an honor and a privilege for us to participate in the ET2 Doyon bridge dedication. It is important to recognize the sacrifices and celebrate the lives of our fellow sailors. ET2 Doyon made the ultimate sacrifice, and his professionalism and dedication to service is an inspiration to all of us.”

The jet made a wide turn to the left and zoomed across the SHS graduation ceremony, then flew another pass over the bridge, but it was hidden by the clouds on the second flyover.

Next Article
Observer Scholarships Awarded
The Suffield Observer’s two $1,000 scholarships, one in memory of Sam Fuller,…