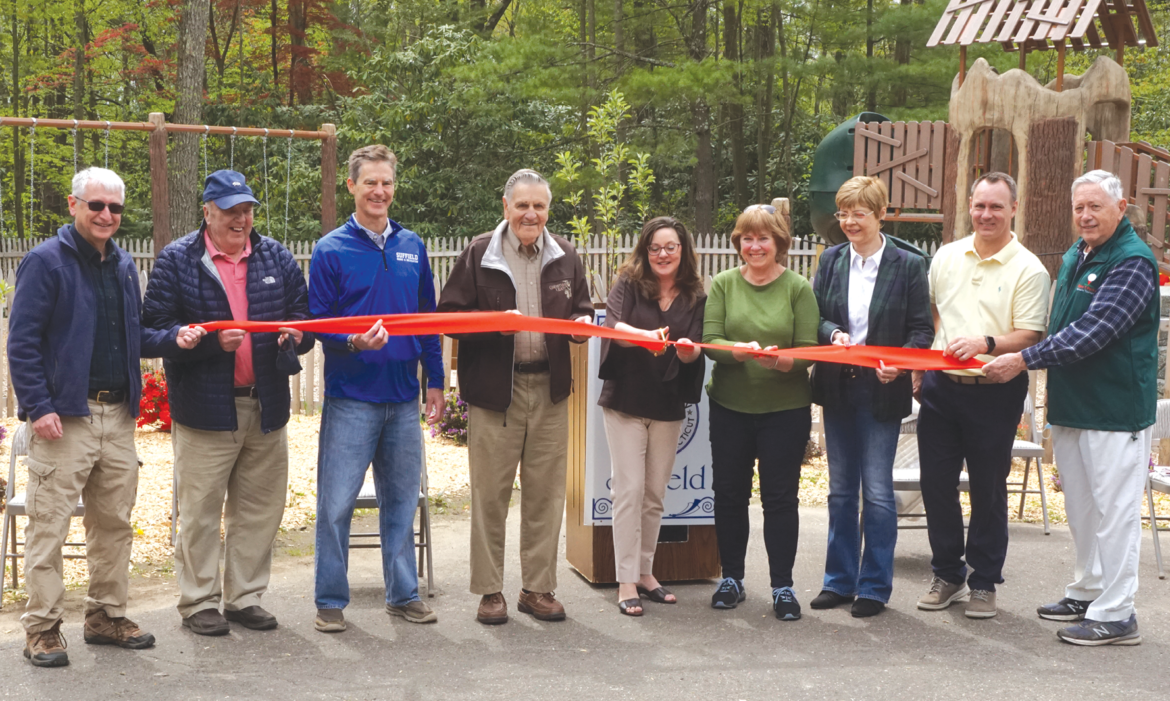 Over 40 interested folks gathered at Sunrise Park on Saturday morning, May 8, to celebrate the opening of a new nature-theme playground next to the parking area by White’s Pond and the Rotary Pavilion – the heart of the big mountainside park.

The playground had become available in the fall of 2019, with winter approaching, so an official opening had been planned in the spring of 2020, but COVID-19 intervened. Now, with pandemic restrictions easing, First Selectman Melissa Mack, in her opening remarks, spoke of the event as something like Rip Van Winkle, awakening from a long, unexpected slumber. She thanked, and named, all the Town employees and volunteers who made the playground possible.

Suffield Parks & Rec Director Peter Leclerc, also spoke, along with Rotary Club President Scott Seabury, whose organization had donated about 20% of the cost of the playscape equipment. Brian Casinghino, chairman of the Parks and Rec Commission spoke of the good work that Leclerc and his staff have been doing, and as Sunrise Park and Stony Brooke Park operate under the purview of the Conservation Commission, Casinghino persuaded Art Christian, the chairman of that Commission, to speak. Christian added to First Selectman Mack’s comments about the great initiatives new Park Superintendent Tom O’Brien was undertaking. O’Brien was present, but declined to speak.

Then the traditional red ribbon was stretched out in front of the portable lectern. It was held by eight individuals very much involved in making this event possible. First Selectman Mack wielded the scissors, and the playground was officially open.

In the long delay since the playground was completed, many venturesome families had already discovered the place, so it had been appreciated for months. Built by Premier Park & Play, of Newton, Mass., for the 2- to 12-year old crowd, the main feature, made of construction plastic, is a tree house merged with two spiral slides. There is also a faux rock structure with several climbable levels and a narrow walkway difficult to describe. There are also four tall swings. No seesaws, a. k. a. teeter-totters; they’re verboten these days.

Next Article
Story and Sharing Time at Phelps-Hatheway House
One is never too young to learn about history! New this season,…