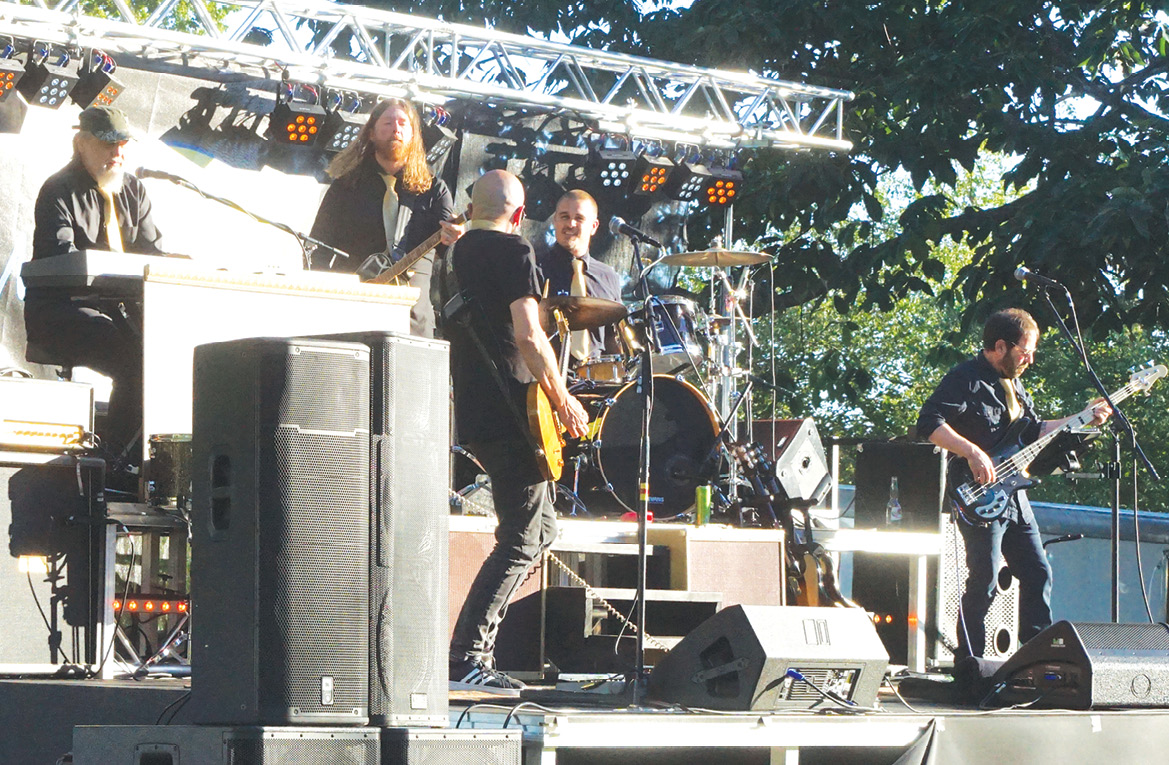 Josh Friend, second from left, with red hair, stretched his coiled guitar connection as he climbed around the set, vigorously adding close support to each of the others in his group, Night Moves. The well-attended June 23 concert on the Green was his second here this summer.

Josh Friend’s second big concert on the Green, continuing the series he’s offering free to celebrate the tenth year of his Suffield Music studio in Suffield, was held on June 23. Like the first one, with Trailer Trash, it was welcomed by rock fans and enjoyed by everyone; the turnout was estimated to exceed 400. This time the band was Josh’s own, called Night Moves, and he was the star performer, with his guitar and voice as the central element of his skilled group.

The powerful beat of the rock rhythm was wonderfully persuasive, and the sound carried up past the bandstand and the town’s big Christmas tree, in whose branches a dozen or so Spaulding-age children were climbing and cavorting as their mothers were chatting (gossiping?) in spite of the music.

The next two every-other-Wednesday concerts were rained out, so Josh’s third concert came on August 4, with King Country offering an excellent batch of what leader Ray Guillemette called “Today’s Hit Kickin’ Country Music.” With Josh’s new, powerful sound system, the band’s volume was as strong as in the previous concerts, but this time I could understand every word.

Several times during this concert, a group of six women gathered in front of the band for line dancing. One of them, Michelle Leaper, explained to me that they were the One-Eyed-Parrots Line Dancing Club, mostly from Chicopee and great fans of Ray’s band, who get together twice a week to practice. A great variety of appreciative fans were present enjoying Josh’s third concert.