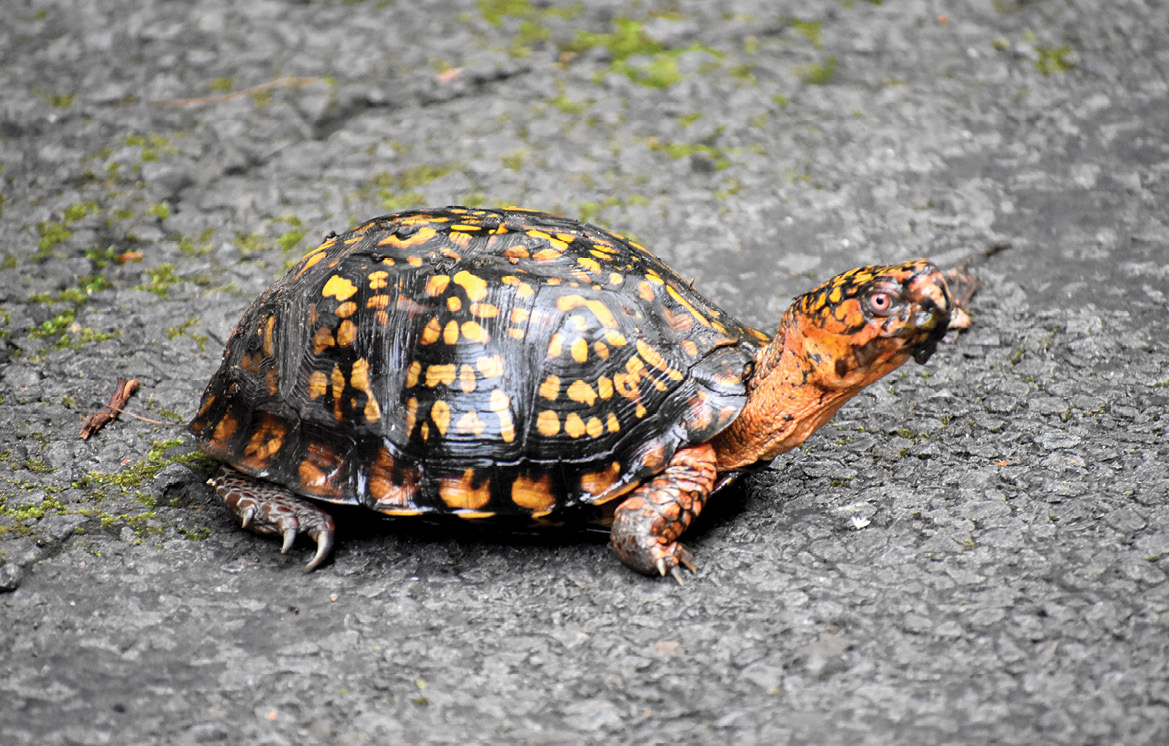 The photographer took this photo of an eastern box turtle starting across a road, then carried it safely across.

The warmer months in New England are turtle season, when the slow-moving reptiles cross the road, often in search of a mate or a nesting spot. They have a strong sense of navigation that pulls them, as it does their more famous cousin, the sea turtle, who swims thousands of miles to return to the same beach where they were born.

Our local turtles do not have such impressive travel stats and do not seem to get the fanfare reserved for their ocean dwelling kinfolk. But they are pretty remarkable and do succumb to that pull to nest in familiar spots, sometimes right where they actually began their lives. I have witnessed turtles trudging back to their birthplace, year after year, around town. As the turtles cross our roads to get to those all-important spots, kind motorists often stop to assist them.

Seen most frequently are our painted turtles or perhaps a snapping turtle. Recently, a few of our rarer eastern box turtles were spied making their way across the streets on the outskirts of town. The eastern box turtle is a mid-sized terrestrial turtle with red or yellow markings and a dome shaped shell. The plastron, or bottom of his shell is hinged so he can close himself up completely in his shell ensemble when threatened. They are omnivores, eating berries, earthworms and insects, and hibernating in the cold months.

A couple of my friends, who also happen to be good Samaritans, recently carried a couple of box turtles across the road. They were careful to check out which direction the turtles were going because if you just put them back on the roadside they remain focused on their destination, even if it means heading right back into traffic.

The eastern box turtle has been put on the list of animals of special concern for the state of Connecticut. They have suffered from habitat loss, traffic incidents and collection for the pet trade. Triple ugh.

One of the main reasons I am obsessed with turtles is their unconventional breeding shenanigans. Getting amorous while wearing a suit of armor seems kind of challenging. If that is not enough, they lead a very solitary lifestyle roaming the woods and meadows in slow motion. If all that wandering does not lead to a male turtle, the female can rely on her ability to store sperm from years gone by. She can close her eyes and recall a night with some dreamy male turtle a few years back, and voila– it’s time to lay another clutch of eggs.

If all these adaptations are not cool enough, according to the National Wildlife Federation, the sex of the baby turtles is determined by the temperature of the nest. Warmer nests produce females, cooler ones males. So clearly there is a lot going on regarding the procreation of the world’s cutest babies: turtles. And believe me, I’ll stop at every rock that even slightly resembles a turtle to make sure they all get across the street in one piece.

I figure it is the least I can do as I remember back in the 70s when I headed to the five and dime with my mother. There, after I tugged relentlessly on her hound’s tooth straight skirt, she brought me to Grant’s pet department where we purchased a baby red-eared slider turtle complete with a palm-treed plexiglass lagoon for him to live in. Like lots of kids across the nation in this era, our turtles lived in our bedrooms in this enclosure eating some turtle food and not leading any sort of life for a turtle. Poor thing was subjected to Bobby Sherman’s “Easy Come, Easy Go” 45 on repeat on my record player. I’m sure if that turtle could have escaped, he would have. Before long, these baby turtles would be linked to the spread of Salmonella and, thankfully that pumped the brakes on pet turtle sales. I still feel bad about the little terrapin in the lagoon in my bedroom and hope, with each turtle I assist across the road, I can start to make up for it. I have a long way to go.

Next Article
How Do You Say Good-bye to a Tree?
For years, this mighty oak, most likely over 200 years old, has…