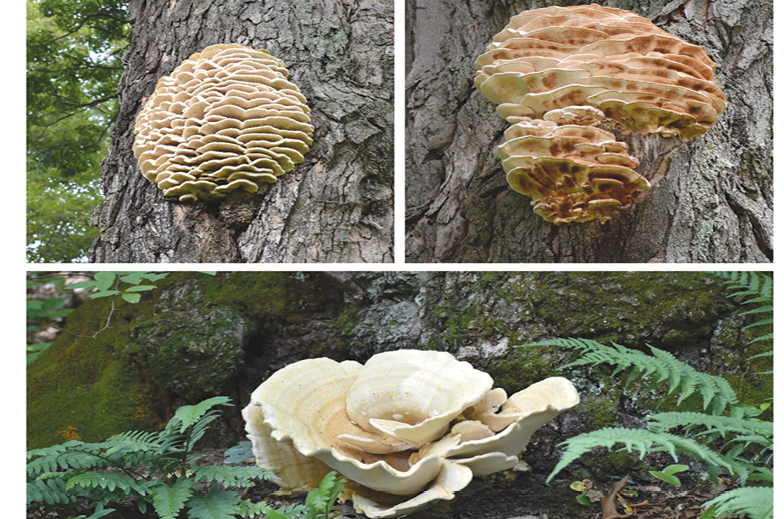 I call it procrastination month as everything I had planned on doing since the migratory birds arrived in April I have put off to November. And suddenly it’s upon us. I don’t feel like doing anything that I said I would do, but isn’t that what procrastination is all about? Turning the calendar page from glorious October can be disheartening, especially as we think about being shut in as the cold weather arrives. We might not exactly embrace November, but it has its merits. Even though we are cooped up, when we do get out, the world is really opened up. We can see forever in the woods, peering off the sides of the trail at the New England landscape unveiled. Stone walls, which were shrouded in greenery during the summer, appear near the trail. Old, dilapidated cars peek out from their bittersweet hiding places on the edges of tobacco fields, and on a smaller scale, fungus is decorating our landscape.

My favorite is Northern tooth fungus which likes our sugar maples and sets up residence in a wound on a tree. Each year in the late summer and fall, the tooth fungus produces fruiting bodies which look like layers of meringue protruding from a crevice of a tree. They start off a crisp white and have yellowed by now and will soon fade away. Fungi are widespread and there are 144,000 organisms in the fungi family which include yeasts, rusts, mildew, mold and mushrooms. In case you need convincing on the merits of fungi, they are best known for breaking down organic material. And while there are some unwelcome varieties (think blue mold for the tobacco farmers, athlete’s foot fungus) these villains of the fungi world are offset with the overachievers including penicillin, yeast and a good block of Stilton.

All my thumbing through field guides on fungi inspired a trip down memory lane. Back in the day when my kids were young, I would save our leftover kitchen scraps to supplement food for our flock of hens in the coop. Typically, I would send the kids out with a bowl filled with bread crusts caked with mold, a mushy banana or two, the peelings of our apples and some nasty wilted lettuce It was the only household task they liked to do, with the exception of cleaning the lint out of the dryer, which you must admit is pretty fun. One day I happened to follow them out, and I found the kids holed up around the corner of the shed eating all the spoiled food earmarked for the Rhode Island reds, including the mold encrusted bread. These were the same kids who shunned anything I fixed at mealtime despite including Chef Boyardee and frozen peas, a popular menu from my childhood. My mom was not much of a cook, nor am I. So they could outlast us at the dinner table with all sorts of food avoidance shenanigans, and here they were shoveling in rancid food under the watchful eye of our flock. I could only hope that their consumption of moldy bread channeled the health benefits of penicillin. Or that’s what I told myself, and no one had to spend the night in the ER thanks to their food choices.

So back to the present, here I sit facing November. I have Guns ‘n Roses November Rain circulating through my head. My piles of junk await, and lists grow, not crossed out, of things I thought I might actually accomplish before the month ends. Procrastinators are quite adept at finding the easy route. Axl Rose did say that nothing lasts forever, and that includes both fungus and piles of junk waiting to be sorted. So I am on to the next thing. I have swapped out the Chef Boyardee for a ploughman’s’ platter, one of my mom’s most favorite meals (basically cheese and crackers, maybe a grape or two). And the Stilton’s aftertaste will remind me of the power of fungus. Maybe I’ll be inspired and mosey off and get some yeast to try my hand at bread making. More likely not. That was one of the items on my list, and I guess it can wait till next year.

Next Article
Suffield Community Aid
Are you in need of a little holiday cheer? Apply for the…