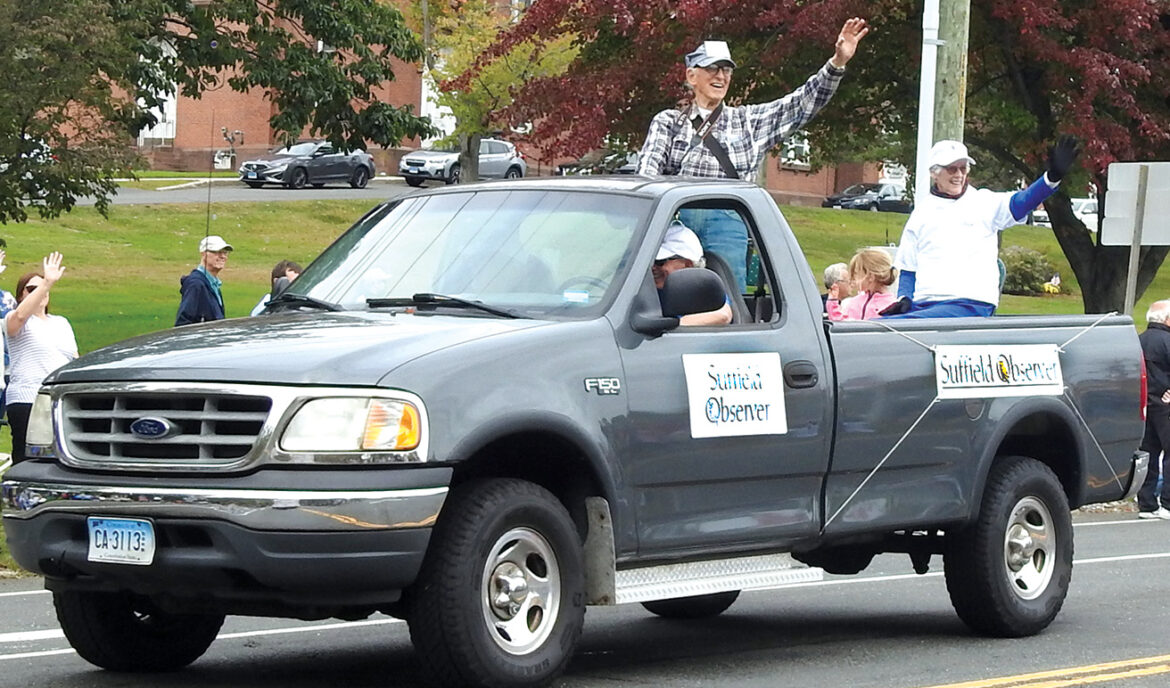 Suffield Observer photographer-reporter Lester Smith and former key staffer Ruth Zimmerman wave from the old truck that Ben Fuller, driving, had inherited. His father, Sam Fuller, was the newspaper’s founder. Ann Kannen, Managing Editor, is in the driver’s passenger seat and Madison Presser, the author’s grandchild, is sitting next to Ruth.

It is an axiom of journalism that the reporter should avoid becoming part of the story. But when your mission statement begins with “to build a sense of community throughout the town of Suffield” it makes for an easy decision to bypass that axiom and join in as a participant in the 350th Parade honoring Suffield, rather than remaining a mere observer and reporter. And in doing so, this paper chose to honor its own history.

Witnesses to the parade presumably saw the truck with Suffield Observer signs attached. Long-time residents may remember that for many years Sam Fuller, the founder of this paper, drove around town in his truck, with a Suffield Observer insignia on its side. That very same truck was driven in the parade by Sam’s son, Ben, who had restored the now vintage truck. (Not visible in the cabin is Ann Kannen, our Advertising Manager and Managing Editor for the past ten plus years.)

Standing, in the truck bed, wearing his trademark engineer’s hat with a press badge attached is the easily recognizable Lester Smith, who has written voluminously for the paper since its inception, also the Observer’s lead photographer and a long-time Board member. Lester is also the town historian and curator for the King House Museum. An engineer by trade, Lester, now in his 90’s, procured a detachable handle so that he could safely stand in the truck bed and wave to the crowd, many of whom called his name when he passed by.

Seated in the bed, wearing a white Observer hat and T-shirt, is Ruth Zimmerman. Although perhaps less well known than Lester, there is no one more instrumental in establishing the Observer as a viable entity than Ruth. From the time the paper was first established, more than twenty years ago, Ruth was instrumental in setting up the behind-the-scenes backbone of the paper. For over a decade she did all the advertising work, procured necessary computers and printers, established all our procedures (many of which continue to this day) as well as recruiting and training all the initial volunteers.

It is fair to say that without these two there would be no Suffield Observer. On the other hand, next to Ruth is the author’s granddaughter Madison. Madison has contributed absolutely nothing to the paper (other than being the subject of an article entitled “Quarantine 2020 Productions Stirs Global Interest” in October 2020 issue) but she apparently got tired after walking behind the truck for a while and when placed in the truck she quickly found a comfy spot. We thought a picture combining two historical and seasoned pillars of the Observer, along with a five-year-old, captures the spirit of the 350th, where our town both honors its past and looks to the future.