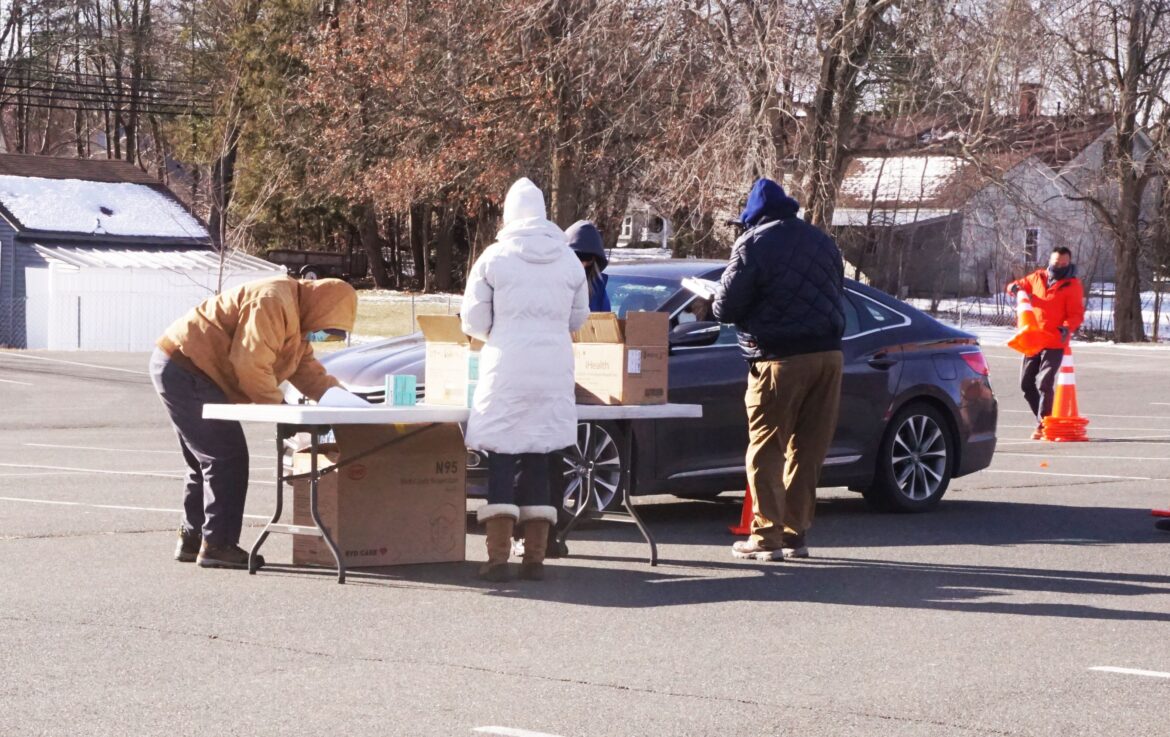 In the Middle-McAlister parking lot on January 15, Emergency Manager John Spencer (at the car window) prepares to hand out a test kit box and some masks to one of the last cars of the third distribution. At the right, First Selectman Colin Moll brings in a traffic cone after the other distribution station at that site shut down.

Suffield’s first distribution of COVID-19 Test Kits, provided free by the State, was able to hand out only a little more than 1,000 kits, as well as twice that many N95 masks.  Unfortunately, the supply was nowhere near enough to meet the demand, and the subsequent traffic jam and disappointment at the first distribution were significant ― and furiously reported on social media.

Published news media had announced that the State expected a shipment of kits to arrive at Bradley Airport, and batches would immediately be distributed to towns.  Suffield Emergency Management Director John Spencer was notified, and he made plans for local distribution.  He sent out requests for volunteer assistance and announced that some of the kits would be given to Suffield’s ambulance staff and to the Senior Center.  The remainder would be handed out on a first-come-first-served basis to Suffield residents arriving in cars at Suffield High School.

Spencer made clear that the number of kits was limited, asking that those who have the means to obtain a kit elsewhere not ask for one in the free distribution.  He added that he “would like these kits distributed to anyone who has had a known exposure to someone who was COVID positive and those who are currently experiencing symptoms that may be related to COVID and cannot receive a test elsewhere.”

By 2:45 Sunday afternoon the line of cars that had assembled filled the east end of Sheldon Street and extended all the way back to Main Street and somewhat more.  At 3:00, waiting cars were guided into the Agriscience entrance at Suffield High School.  Suffield residency was checked at a station by the Large Animal Facility, and the cars then drove around behind the school to the main parking lot, where they could line up at one of the three hand-out stations set up there.  Volunteers handed two kits to each car through a car window, along with a small package of N95 masks.  Quite soon, one of the hand-out stations was out of kits, and it shut down.  Then a second shut down, and by no later than 3:15 the distribution was over, with many cars still waiting.

The test kits were labeled BinaxNOW, made by Abbot Diagnostics, in Scarborough, Maine.  Each kit contained two home tests, to provide for the recommended confirmation of a negative or invalid result. Later that day, First Selectman Colin Moll published a message to the residents of Suffield, thanking everyone who staffed the event, including a great many volunteers, along with Emergency Management Director Spencer.  He promised to work with the State to get more kits.  That effort evidently paid off, as two shipments of 450 boxes of test kits each were received.  These were labeled Covid-19 Antigen Rapid Test, from iHealth, a company in Cromwell, Conn.

Two additional distributions were held by mid-January. For these, Spencer had the time to change the hand-out method to avoid the problems of the first.  For the new distributions, a new announcement said test kit requests “should be prioritized to anyone currently symptomatic or at high risk and to those households that did not receive a test kit previously.”  Distributions would take place at two locations, the High School and the Middle-McAlister parking lots, with two stations at each location.   They would begin at 10 am and remain open for only one hour.  Residents were to sign up for arrival times. The first of these distributions took place on Saturday, January 8.  The second was held one week later.  The waiting lines for cars were short, and both distributions went quite smoothly.

Next Article
Why Did I Get A Notice Questioning My Address?
The annual canvass of voters has started. The purpose of the mandated…