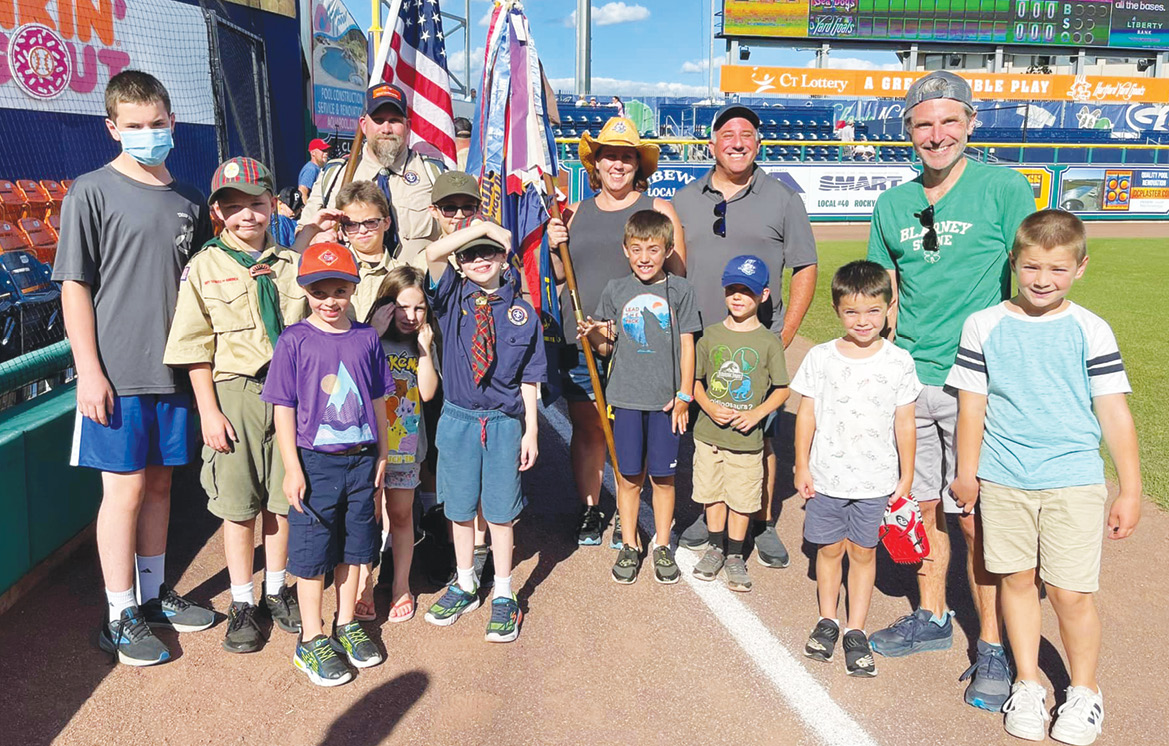 The boys and leaders of Pack 266 pause for a photo when they assembled for a parade at Dunkin’ Donuts Park on Scout Night in July.

Cub Scout Pack 266 has had a fun-summer! In June we had our Blue & Gold ceremony, where we celebrated the accomplishments of each Cub Scout and congratulated them as they moved up to the next rank. Family and friends watched as each Lion, Tiger, Wolf, Bear, and Webelo was awarded a patch for the rank they completed in the ‘21-’22 year. Each Cub Scout was also gifted a neckerchief and slide for their newly achieved rank. After the ceremony we enjoyed a delicious potluck together to end the celebration.

In July Cub Scouts and their families attended Scout Night at the Hartford Yard Goats. We got to walk the outfield warning track before the game as part of a Scout parade with other Scouts from across the state. The Cub Scouts were also able to go down on the outfield track during the national anthem, where they displayed the troop flag and the American flag. The Yard Goats played the Portland Sea Dogs that day, and the game turned into quite a nail biter at the end! The Yard Goats won with a 2-run homer in extra innings, which led to lots of excited cheers and celebrating. After the game and fireworks ended, all Scout families were allowed to camp out on the field. Everyone pitched their tents and relaxed while watching Sonic the Hedgehog on the big screen under the stars. Scouts got to run and play on the field during the movie. The lights went out around midnight, and everyone did their best to get some rest before packing up early the next morning. It was an amazing experience for all.

August brings a family campout at Sunrise Park. Fishing, games, s’mores, and lots of fun are always on the agenda at these campouts.

Stop by our popcorn booth at Suffield on the Green September 10 and 11 to say hi. Be on the lookout for an upcoming Scouts on the Green event as well, where all local Scout troops will showcase different activities and answer any questions you may have. Both events are great opportunities to meet members of the pack and see what Scouting is like. All kids in grades K- 5 are eligible to join Cub Scouts. We are always excited to welcome new boys to the pack.