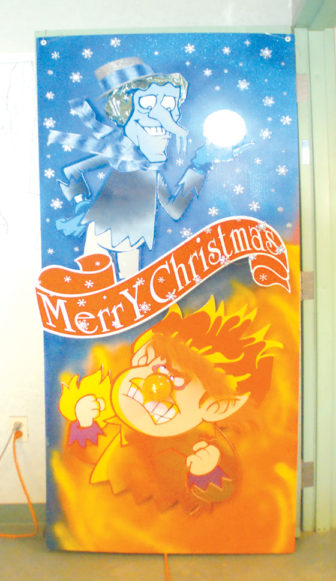 The first prize winner of the Town departments’ Christmas door contest is mounted on Highway Department Foreman Mark Cervione’s office door. The crew got a free pizza lunch as the award.

A contest was held this year for the best-decorated Christmas Door of the various departments of the Suffield Town government, each of which was invited to choose one of their inside doors and let their imaginations and design skills loose. The results were impressive, especially given the fact that many of the doors would never be seen by more than a few of the citizens the departments serve.

The rules were written up by the contest’s originator, Karin Ziemba, the Town’s new Human Resources Director; she also served on the judging team with the Town’s attorney for labor matters, Lisa Lazarek. The two viewed all the doors on the morning of December 19. Prizes were awarded at the Town employees’ holiday luncheon party that day, held at the Suffield Senior Center.

The winner of the First Prize (pizza lunch for the department) was the Suffield Highway Department (SHD). The highway crew’s poster creation, hung on SHD Foreman Mark Cervione’s office door, artistically paired the Snow Miser and the Heat Miser characters from the 1974 stop-action Christmas special, The Year Without a Santa Claus. The Snow Miser’s snowball was a bright white light bulb; the Heat Miser’s nose bulb glowed bright orange.

Second prize (coffee and donuts for the department) was awarded to the Building Department, whose poster quoted the Grinch’s realization: “Maybe Christmas, he thought, doesn’t come from a store; maybe Christmas, perhaps, means a little bit more!” Third prize (a bag of healthful things) went to the Finance Department, who mounted a very three-dimensional snowman on their door.