In 1905, Paul P. Harris founded the Rotary Club of Chicago, which has grown into a worldwide organization with 1.2 million Rotarians in over 35,000 clubs. The Suffield Rotary, on an annual basis, awards a “Paul Harris Fellow” award, named after the founder, to one or two deserving residents of our community. The individual(s) may or may not be members of the Suffield club, but always have acted in a fashion reflecting the club’s motto and purpose of “Service Above Self.” The awards are the most prestigious awarded by our club and the sole criterion is the individual’s service and dedication. This year the Suffield Rotary was pleased to award well deserved Paul Harris Fellow Awards to Mary Ann Muska and Ernie Petkovich. 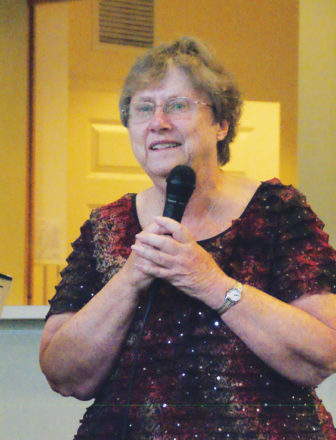 Mary Ann was born in Springfield, Mass., attended Our Lady of Hope School, and graduated from Cathedral High School in 1960. After graduating from Elms College in Chicopee, Massachusetts, she received a Masters in Special Education from the University of Hartford. She met her husband Jack in her senior year at Cathedral and they married a year after college in 1965. Mary Ann used her education training and skills and taught at Buckingham Junior High School in Springfield and later at Agawam High School. She also taught CCD classes at Sacred Heart Church for eight years.

Her community involvement is longstanding, varied, and impressive. Mary Ann was president of the Bridge Street School PTO. She served on the Sacred Heart Parish Council and for 12 years, she volunteered and worked on the Board of Directors of the Suffield Emergency Aid Association. For 18 years, from 1977-1995, Mary Ann served with distinction on the Suffield Board of Education; as board member, secretary, vice chairman and ultimately two years as chairman. She served as a coach for Odyssey of the Mind and the Math Counts programs at the Middle School.

Since 2002, Mary Ann Muska has been an integral part of The Suffield Observer, presently serving as editor-in-chief. Mary Ann has had a long history with the Glenn Packard Golf Tournament from leadership in its formative early years 26 years ago, to the transitioning to Rotary sponsorship. Most recently, she has been a volunteer on the local Opioid Abuse Council. 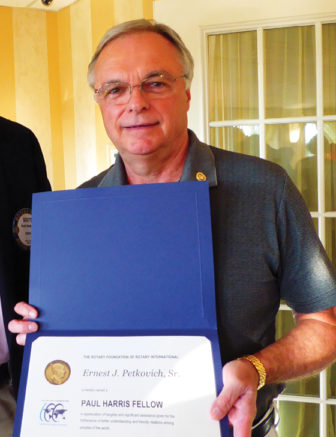 The second, equally deserving, recipient was Ernie Petkovich. Ernie was born in Rhinebeck, NY and was raised in Dover Plains, NY. He has been married to Ann for 51 years, and they have three children and eight grandchildren, many of whom were able to attend the ceremony honoring Ernie’s years of service.

Ernie chaired the Town of Suffield Charter Revision Committee both in 2008 and again in 2015. Through a grassroots organization, “Citizens for a Better Suffield” he has disseminated budget information to residents so that they can better understand the process. For nine years, as a “Choices” counselor at the Suffield Senior Center he assists Medicare eligible residents in plowing through the myriad of options to make the best choices for insurance and prescription options.

Ernie was well known as a coach and supporter of Suffield Flyers hockey, and in the late 80s and 90s as the assistant head coach and head coach of the high school hockey team. He also coached Little League for many years.

On a more serious note, Ernie chaired the Suffield Drug and Alcohol Prevention Council for several years thereafter. More recently he was a founder of the Suffield Local Prevention Council, serving as its co-chair for the last 18 months. That organization, made up of concerned citizens and parents, educators, law enforcement personnel, and health professionals, works with the Capital Area Substance Abuse Council, focuses on prevention, education and community awareness of drug use. You may come across Ernie’s writings, or talks, as he diligently tries to educate our community regarding the realities of the drug problem, including opioids, affecting all communities including ours.

Please join with the Suffield Rotary in thanking our two Paul Harris award winners for all they have done in service to our town.

Next Article
Thank You, Anna
This issue of the Observer had a wonderful young woman serve as…