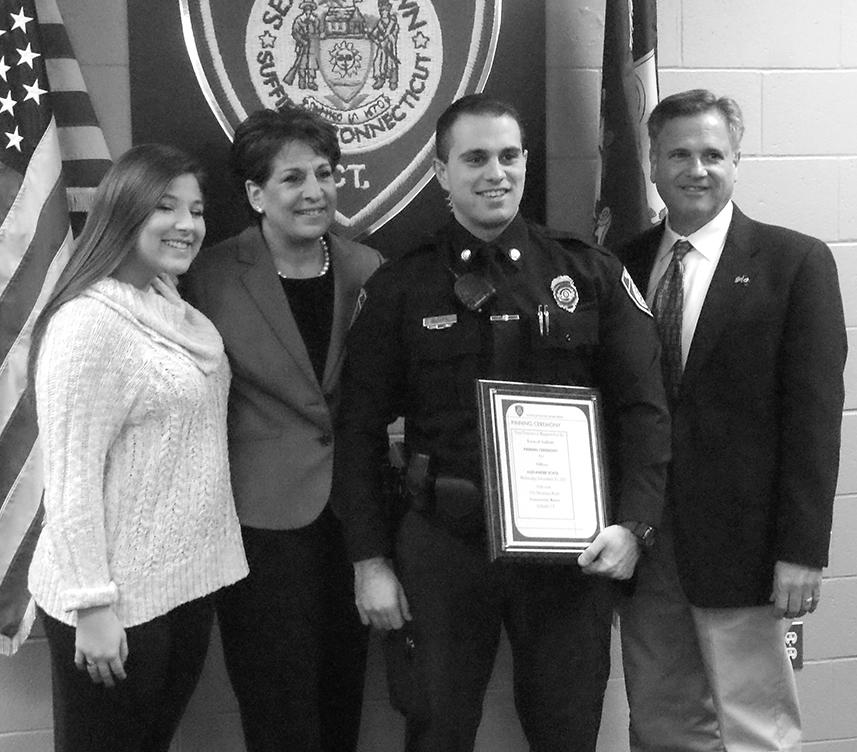 The new badge is a bit awry, but the smile is even and confident as new Suffield officer Alex Scata poses with his family after the department’s pinning ceremony. With him are, left and right: his sister Victoria, his mother Wendi, and his father Robert.

Candidate Alex Scata, a Farmington resident, was so enthusiastic about his intent to become a Suffield police officer that he attended Interim Chief Tony Riello’s departure party in the Suffield High auditorium two Decembers ago. After all the interviews and tests, he was finally made an offer, which he was happy to accept. Soon he was enrolled at the Connecticut Police Academy in Meriden, a 22-week resident program (with week-ends off). Then came six months of probationary duty in Suffield, working with experienced officers, after which he could be certified by the Police Officer Standards and Training Council (commonly called POST) and was finally eligible to wear his badge.

Suffield takes the badge presentation seriously, and a “pinning ceremony” was held in the department’s newly refurbished training and meeting room on December 20, with family, friends, and fellow officers present. Congratulated by Chief Richard Brown, commended by First Selectman Melissa Mack, and sworn in by Town Clerk Kathy Dunai, Officer Scata finally submitted to that traditional, slightly awkward procedure of being pinned by his mother, followed by the equally traditional family portrait.

It was a 9:00 a.m. ceremony, so coffee and Danish were offered in the reception that followed.