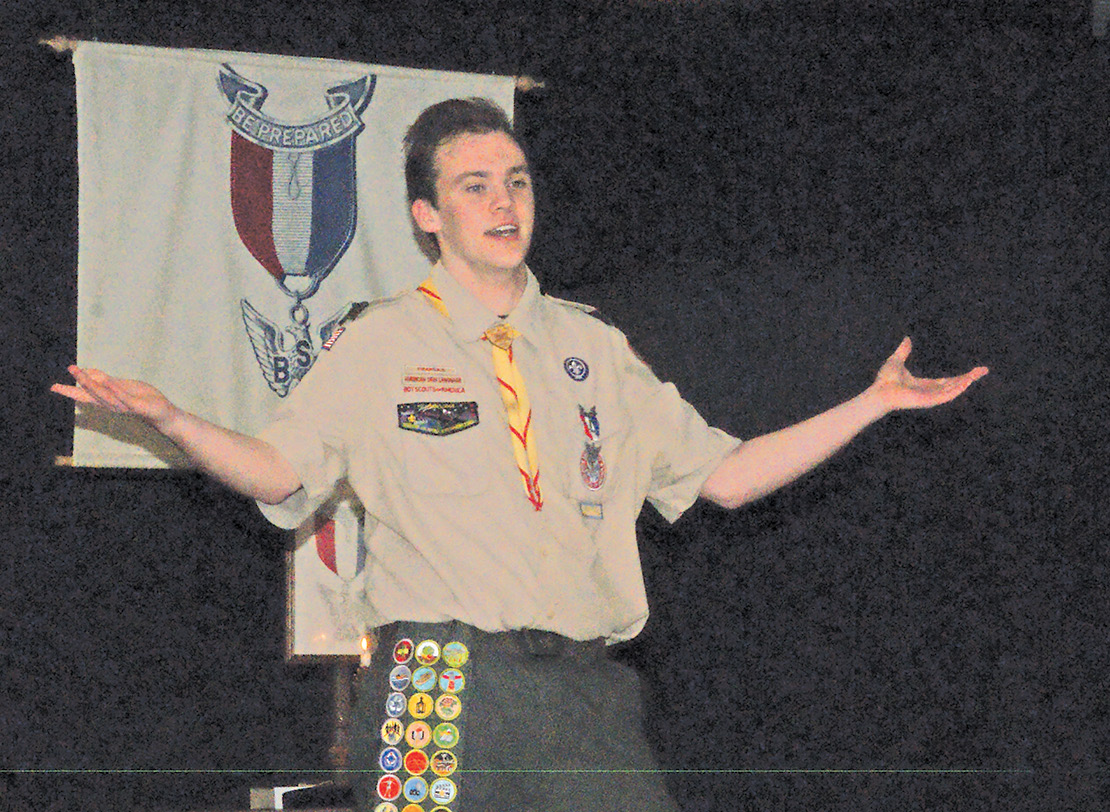 New Eagle Scout Mickey Barron spreads his arms in gratitude at the end of his Troop 260 award ceremony on January 8. Like most Scouts, he had a lot of guidance and help along the way, and he expressed his appreciation well.

Sometimes it’s not easy to find a workable date to celebrate a new Eagle Scout’s achievement, and Mickey Barron’s Eagle ceremony had to wait for Christmas break at Emmanuel College, in Boston, where he’s beginning another long achievement trail: he hopes to go to medical school and do some good for humanity from that vantage. The Eagle ceremony was held on January 8 in Fellowship Hall at Second Baptist.

In Cub Scouts and as a youth leader in Boy Scout Troop 260, Mickey did quite well, reaching the roles of Senior Patrol Leader and Junior Assistant Scoutmaster. Younger Scouts regarded him as an example to follow, and he won just about every special award the Troop can offer. His 39 Merit Badges for individual topics totaled almost twice the number required for the Eagle rank.

At Suffield High School he combined one of his interests there with his Eagle Scout service project, working closely with teacher Carl Casinghino to design and install the furnishings to renovate the studio used for the Morning Update Team’s announcements and general video productions. He raised over $1,000 for the material cost and led the large team of volunteers in the construction effort.

Mickey chose to include American Sign Language among his high school courses, and his teacher and one of his classmates took turns translating the Eagle ceremony for one member of the audience.

Along with the traditional elements of the ceremony — the candle-lighting, the Eagle Charge, the Eagle Award presentation and medal pinning, the certificates from First Selectman Melissa Mack and Representative Tami Zawistowski, the binder full of recognitions and letters, and the final comments by Scoutmaster Mike Cremins — this event reached a new record. Eighteen Eagle Scouts identified themselves and stated the year and place of their awards, undoubtedly a new record for a Troop 260 ceremony. As always now, the number includes the space left in the Eagle line-up for Eagle Scout Steve Bixler, 2003, Troop 260, Suffield’s only loss, so far, in the current War on Terror.

Next Article
Where in the World is the Observer?
Julia and Matthew Oprica and the Observer are pictured near Balea Lake,…