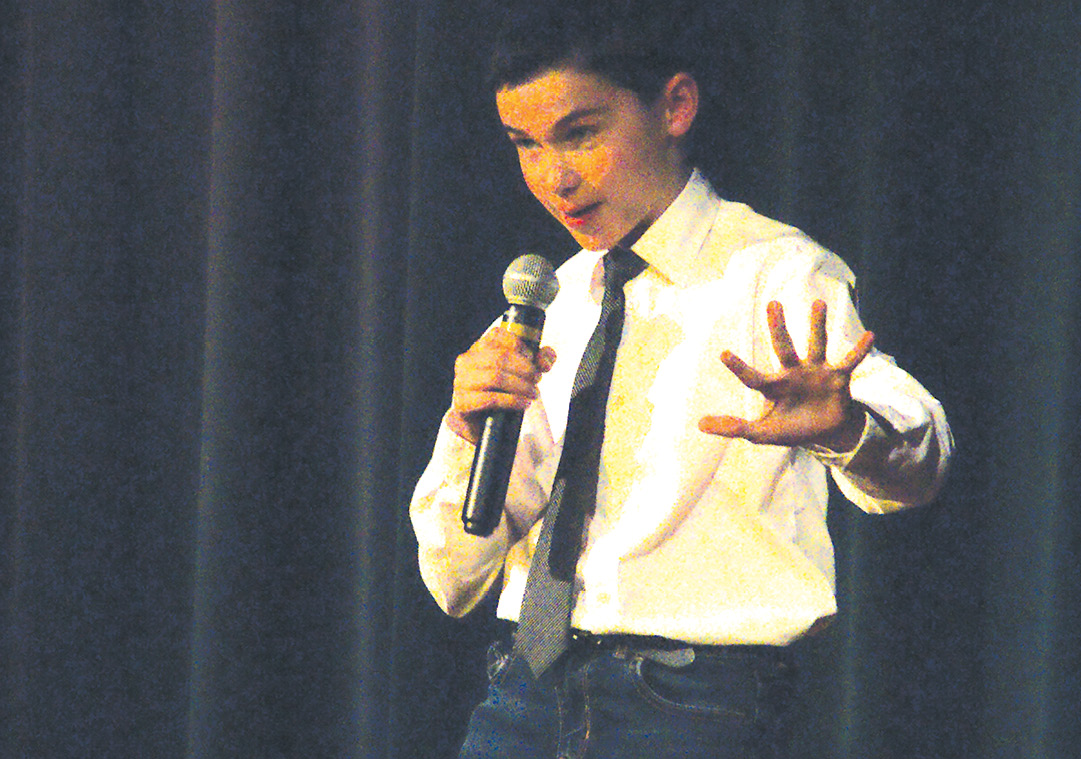 Reciting the names of the presidents, sixth-grader Christian Flanagan smiles as he approaches the comic climax of his performance in the Suffield Middle School Talent Show on November 19.

The Suffield Middle School talent show was called Shiver Me Timbers and featured a pirate motif, but the shivering on November 15, the planned show date, was mostly from the substantial snowstorm, and the show was postponed to November 18. There may have been a few unavailable performers, but the production was great nevertheless, and the supportive audience had good reason for the plentiful applause and lots of laughter. It was an enjoyable display of diverse talent, with over 40 students and four teachers contributing onstage and more helping backstage.

Most of the performances were music and dance, solo and ensemble. Two solo dancers were particularly impressive. Lukas Nick performed expressively in a somewhat puzzling ”Wii Music Remix,” oddly costumed with an impassive mask, and Lily Smith danced gracefully in a piece she called “Angie Baby.”

There were diverse musical performances, including the SMS Boy Band of Mr. Dobi and Mr. Drago, which provided the enthusiastic music for Purple Pringle Potatoes as three of the piece’s creators, Mercedes Szabo, Anna Washburn, and Samantha Wysocki, danced and sang. Among the other instrumental pieces, Gabriel Jiang offered a competent piano performance of Sonatina No. 5, and Eva Addapoor and Emily Kaleta, both 6th graders, gave a rendition of an Ayre and Dance, well played as a clarinet duet.

But what brought down the house was a young stand-up comedian, one of only two comedy acts in the show. When Christian Flanagan, a 6th grader, announced that he would recite the names of all the U. S. presidents, some folks probably expected an impressive, but boring, memory exercise. The recitation started out that way, but the presidential names were soon interspersed with relevant historical factlets that grew more and more interesting and entertaining as the list went on. Then at some point near the end — perhaps it was at William McKinley — Christian paused and announced, “Now I’m going to recite the next names backwards,” and he turned around to face the curtain and continued the recitation. The audience exploded with laughter, the most of the evening. (He offered no factlet, false or otherwise, with the final name.)

Another solo performance was the original poem spoken courageously by Bethany Richardson-White, “Identity.” Here the emotions expressed were undoubtedly profound.

The last number, “Best of My Love,” was sung by music teacher Laura Noonan, extravagantly costumed in pirate garb. She had been a big part of organizing the show and did most of the announcing. Now she called out the backstage crew and all the performers for a grand bow and thank-you, which turned into a multiple photo-opportunity following a great evening.