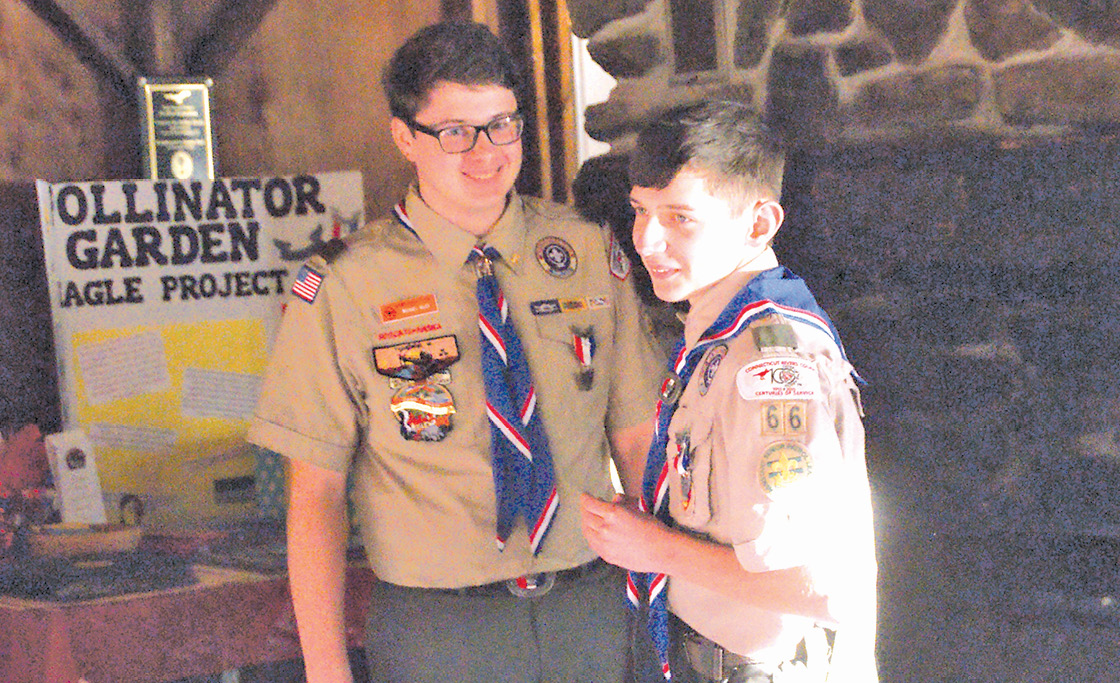 Quinn Bathgate set his sights on becoming an Eagle Scout from the time he became a Tiger Cub eight years ago. Now, at age 15 after four and a half years as a Boy Scout in Troop 66, he has achieved that goal. The Eagle award ceremony was held at Sunrise Park on October 21 in the pavilion, packed with family and friends who were there to share the joy. As is their custom during the traditional event, First Selectman Melissa Mack and State Representative Tami Zawistowski presented certificates, and Quinn was given a binder filled with congratulations from many prominent folks.

Not only had Quinn fulfilled the requirements for the rank – the highest a Boy Scout can achieve – he had earned 37 Merit Badges, far more than the 21 required. In doing so he learned something about wilderness survival, sailing, chemistry, climbing, cooking, gardening, and much more.

The Gardening Merit Badge may have led to his choice for an Eagle Scout Service project, a major requirement for the rank: He planned and led the creation of a substantial (over 500 sq. ft.) pollinator garden, a.k.a. butterfly garden, at the Remington Street entrance to Stony Brook Park. To support local butterfly and bee populations, he planted the garden last fall with milkweed and other appropriate types and maintained it throughout the recent summer.

When this reporter asked what was the most important thing he had learned from Scouting, Quinn answered, “leadership.” That skill should certainly serve him well throughout his life.

Next Article
Successful Salesman
Like many Scout units, Suffield Cub Scout Pack 266 gets a big…