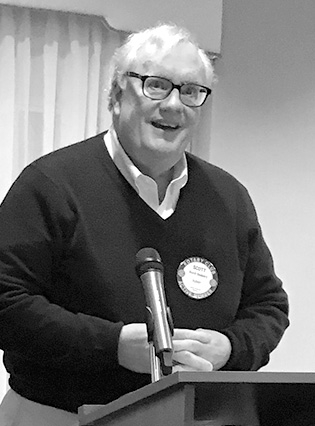 It’s not every day that you get to see yourself in a national movie, especially when Dean Cain (remember he was Superman and Teri Hatcher was Lois Lane?) gets to play you! Scott Seabury will tell you how it happened in a Kent Memorial Library program held at the Suffield Senior Center on Wednesday, March 27 at 6:30 p.m. Accompanying Scott will be Agawam resident Michael Tourville, the author of the book, A Promise to Astrid which set the stage for the movie. Both Scott and Michael attended the final days of filming the movie also called A Promise to Astrid in West Virginia last October.

The phone call from Michael Tourville informing Scott about the movie and his part in it, was a total surprise to Scott. He knew that Michael had written the book. In fact, Scott had written the introduction for it.

A Promise to Astrid  is a true story which took place in Chicopee between Astrid and many others who resided in the city, including Michael Tourville, who was her neighbor. Until her death, few knew that Astrid, an elderly woman who appeared to have little money herself, supplied money to those in need. Most of her gifts were anonymous. To recipients who received her gift directly, she made them promise to tell no one of her identity and she also asked them to pay it forward, to someone else in need.

Scott never knew Astrid. Even though he was the Rector of St. Christopher’s Episcopal Church in Chicopee, a church that Michael Tourville and Astrid attended, Astrid had died before Scott assumed his post. So, finding out that he and his wife, Linda, had been written into the movie was incredible. Even more astonishing is that, although in the movie Scott has three daughters, in reality he has one. One of his movie daughters bears the same name as his daughter, the second has the name of his granddaughter, and the third has the name of his former golden retriever! It is proof that movie producers like to tweak the facts, no matter how small.

Michael is in the process of publishing a new edition of his book. It will include notes and photos about the movie and cast. Also forthcoming will be an audiobook. Scott has a part in that also. Scott and Michael have more stories to tell about this exciting bit in their lives. They bear witness that God moves in mysterious ways. Astrid must be smiling.

Next Article
Russian Math
My grandchildren are taking Russian math. This was quite a surprise to…