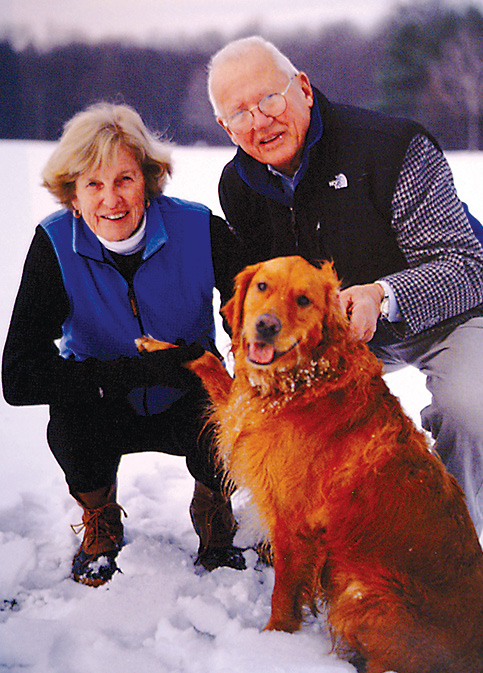 Photo provided by the Fuller family

Observer Founder Sam Fuller and his wife Jane are pictured in the snow with their golden retriever, Obie, named for the Observer.

The way I see it, it all started as we sat around the dining room table, my dad telling us stories about growing up while I was trying to hide my peas under my mashed potatoes. He was a good storyteller, and it was important to him that we knew what life was like growing up on the farm around the corner where he was the seventh generation to take his first steps on that patch of land. So, he had accumulated plenty of material to share with his offspring.

Then, when it was time for us to sashay off to our respective colleges, my father still had more to say, and he madly penned letters to us each Sunday. He’d plunk down on the typewriter and address one letter to the four of us, put some carbon paper in and produced four copies. These letters would be put in the mail Sunday night and would arrive in my mailbox on Tuesday while I was on the way to Zoology class.

Dad was still at it, giving advice like “you get out of life what you put into it” and such. He needed to expand his repertoire so he told us stories of his childhood, many of which we had heard around the dinner table. But they looked different in print and could usually bring a smile to my face as my dad had a way with words.

Then he took to adding excerpts about each one of us that he had somehow gleaned. So, the boys and I had the pleasure of reading about each other and learning who had just been dumped, who was flunking stats and who was having the trouble parting with the freshman 15.

Once we graduated and entered the real world, these letters evolved. My dad traded his typewriter and white out for a computer and took his stories, added some photos, flattering or not, and included reflections on current events in a little newspaper that he sent to his friends and family. He called it the “Suffield Sentinel and Witness” named after a small newspaper in Middletown that my mom’s family had been involved in. This paper kept him out of trouble and gave him a platform on which to pontificate. But that couldn’t go on forever, and in 1998 my dad started having conversations with friends about the possibility of our own paper here in town. With a group of mighty volunteers the first issue was published two decades ago. It’s a far cry from those Sunday night letters, but little ideas take time to grow.

Next Article
Dedication to the Observer: A Family Affair
Bob Warren served on the Editorial Board for the paper’s first issue…