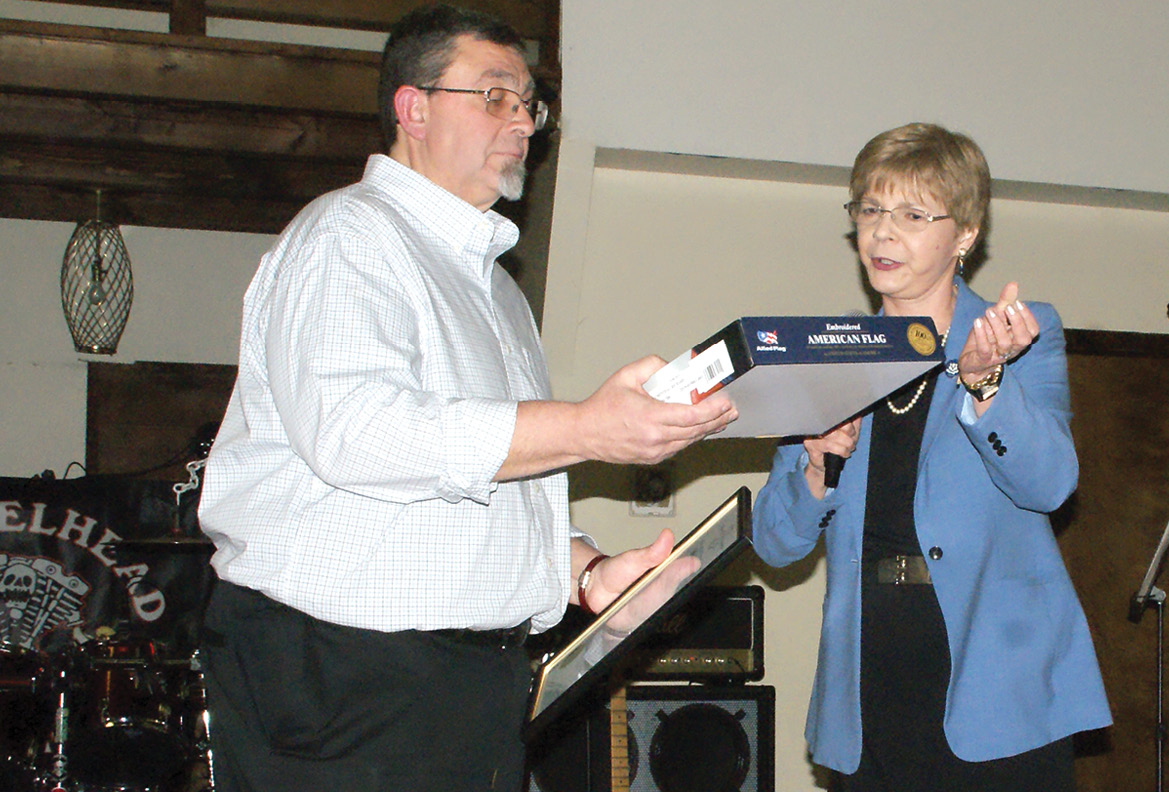 With a proclamation from the General Assembly he had just received from Representative Tami Zawistowski in one hand, Peter Osowiecki examines the boxed flag from Senator Blumenthal that followed. Next, also delivered by Tami at Peter’s retirement party on April 5, was a proclamation from Governor Ned Lamont.

According to the dictionary, to fete is to honor with a celebration, and Officer Peter Osowiecki was very much honored at the big retirement party his friends held for him on April 5. Over 200 came to the Sun Valley Resort banquet hall in Stafford that evening, including fellow officers and leaders of the Suffield Police Department, along with a diverse crew of folks he had helped during his 30 years of service.

Peter, who graduated from Suffield High in 1979, had begun his law enforcement career in Suffield as a dispatcher and supernumerary but soon became a certified officer. He served in a wide variety of assignments, which may not be unusual for a person of his competence. The main organizer of the party, Ashley McMann, now a key aid at the Legislative Office Building in Hartford, said she first met Peter as one of the Police Cadets in the Police Cadet corps when he was the Corps advisor. At one point, he became the first to serve as School Resource Officer.

But in recent years, Peter had become deeply involved in one specialty: police work dogs. Having become a master trainer himself, he developed a dog training school in Suffield’s closed Bridge Street School, where he had several rooms simulating challenges a police dog might encounter. Other training used the school parking lot. His facilities included ingenious equipment that offers an automatic reward when a dog’s search succeeds.

When the empty schoolhouse was closed for any use other than storage, Peter moved his training school. Former Police Commission Chairman Kevin Armata had consolidated his Windsor Marketing Group business into expanded quarters in Suffield, and he offered good space in his then underused industrial building in Windsor Locks. Peter has put a lot of personal time into developing and managing the school, and he assures us that he intends to continue.

Multiple officers from Connecticut and Massachusetts police work dog associations were present to honor Peter with impressive remarks and interesting gifts. More gifts and commendations were offered by Suffield Police Chief Richard Brown and former Chief Mark Leahy, former Police Commission Chairmen Armata and Gordon Stagg, representatives of the Suffield Police Department and Firefighters unions, and others. State Representative Tami Zawistowski did triple duty, presenting proclamations from the Connecticut General Assembly and Governor Ned Lamont, along with an American Flag that had flown over the U. S. Capitol, given by Senator Richard Blumenthal. With this crowd who knew Peter well, there were plenty of entertaining reminiscences added to the heart-felt praise.

Peter responded with good reminiscences of his own and his thanks to Chief Brown and others he had worked with over the years. There was a good deal of friendly banter with others – out of uniform, cops can be fun!

A buffet dinner followed, with music from a four-man band called Shovelhead playing Southern Rock, a style from the period when many of those present were young. But no one danced except Peter’s three-year-old grandson.