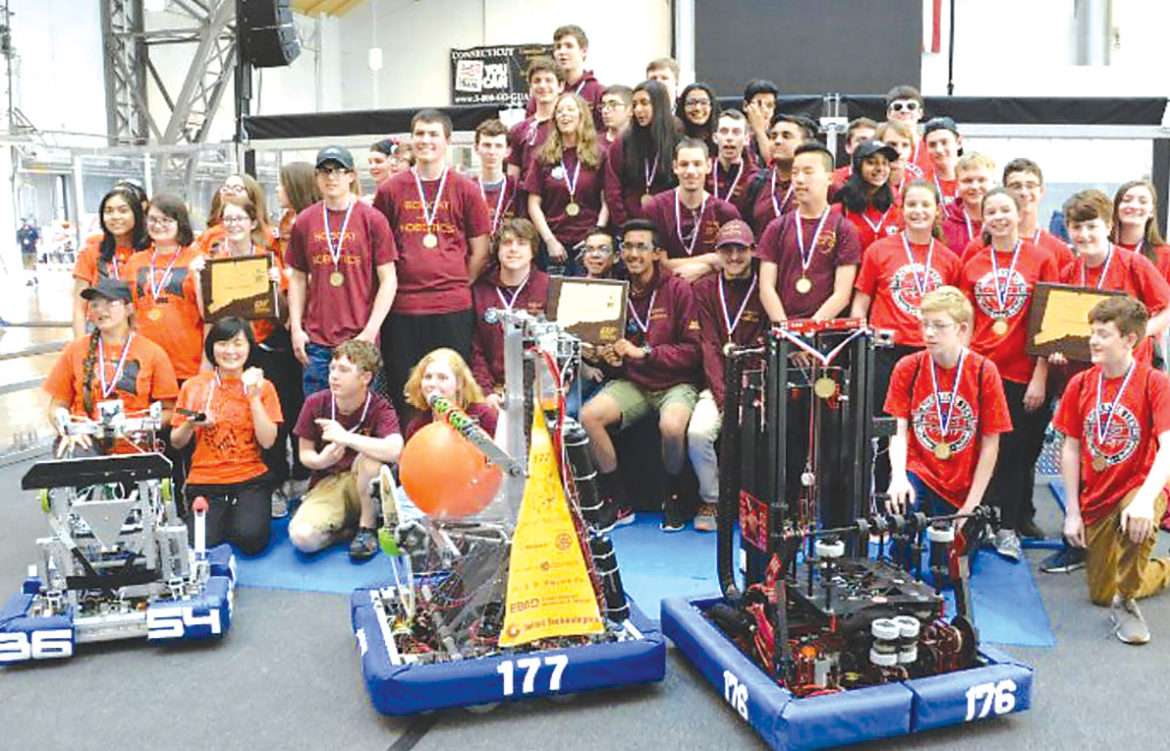 Members and robots of the winning alliance in the 2019 Connecticut FIRST Robotics Championship pose in the State Armory after the May 11 event. From the left: Team 3554, Middletown; Team 177, South Windsor; and Team 176, Windsor Locks-Suffield.

Aces High, Team 176, has a proud tradition, and this year the Windsor Locks-Suffield team in the world-wide FIRST Robots Championship added well to that record. They reached finalist in a New England District event in Waterbury early in March, won the championship in another New England District event in Springfield two weeks later, then reached finalist in the New England Championship in Worcester on April 21. Two weeks later in Detroit for the overall championship, they made it to the play-off matches again, but lost in the quarter finals. In the two-out-of-three competition, they tied, lost closely, then lost again. From Detroit, they brought home the General Motors Industrial Design Award.

Oddly, the Connecticut Championship event followed all that, coming a week later on May 11 in the State Armory in Hartford. As many of our readers will know, each FIRST match is played with two three-team alliances facing each other. The alliances are assembled the way major league teams pick their players in the drafts. In the Armory, Aces High, seeded middling high after the qualification rounds, was the first pick by their friends from South Windsor High School, the No. 2 seed BobCats, Team 177. The final pick was the Tech Tigers, Team 3554, a young, all-girls team from Mercy High School in Middletown.

It was a tough fight, and mentor Ron Horn reported, “Our robot was the target of heavy defense throughout the day.” The alliance won the quarter-finals and semi-finals, each with two straight wins, “despite having to perform emergency surgery on our ball intake.” In the final level, the first match was a 92-93 loss, the second a 94-93 win, and the third a 93-90 win for the championship. This makes three years in a row that Aces High has been part of the winning alliance in the Connecticut FIRST Robotics Championship.

Next Article
Great Day, Great Ride for PMC
The short respite in this year’s unending spring rains came on May…