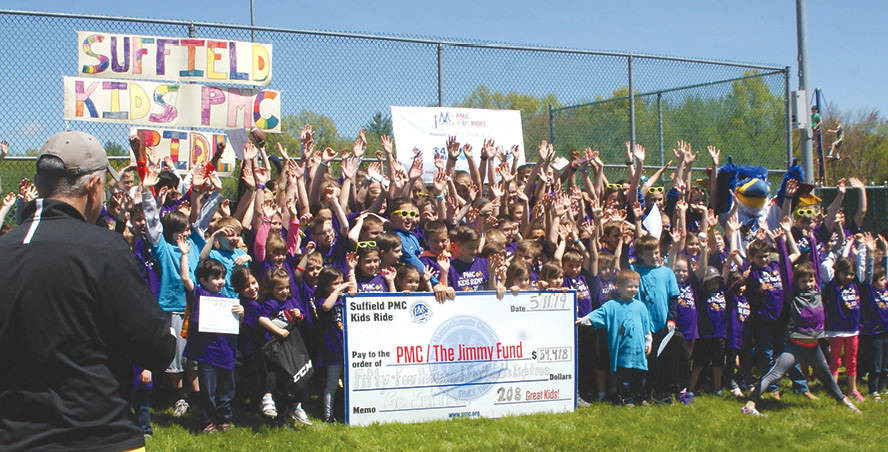 Exuberant kids wave for the photographer after another record-breaking PMC Kids Ride for the Jimmy Fund. Standing at the left, out of view for the official portrait, is event organizer Chris Nikolis. The big check reads “$54,418”, from “208 Great Kids”.

The short respite in this year’s unending spring rains came on May 11, just the right day for Suffield’s eighth annual PMC Kids Ride. The children’s ride is a supplement to the big Pan-Mass Challenge bike ride, a two-day event each summer ending on Cape Cod in Provincetown. All PMC events are fundraisers for the Jimmy Fund, supporting adult and pediatric cancer research and treatment at the Dana-Farber Cancer Institute in Boston. The Suffield PMC Kids Ride, well organized by Chris Nikolis, was the first in Connecticut.

The Suffield ride starts next to McAlister Intermediate School, with older kids riding up Hill Street to Russell Avenue and back – some kids make the five-mile round trip twice. Little kids ride around the circle in front of Suffield Middle School. There’s no official timing.

On May 11, a carnival atmosphere filled the gathering periods before and after, with T-shirts sold, free snacks, pizza and ice cream, extra attractions in the adjacent playground, and plenty of music (provided this year by the four local professionals of Sound Risk). As usual, SFD’s tower truck extended its ladder out to mark the Start/Finish line, and the SVAA’s small robot ambulance trundled through the crowd, always surprising the littlest kids by talking with them. The Springfield Thunderbirds’ eagle mascot also roamed, posing for pictures and exchanging hugs.

When the stragglers finished and the proceeds had been counted, Chris assembled all the riders on the sloping turf next to the basketball courts and made his announcements. He gave certificates to the “heavy hitters” and “breakaway” fundraisers. He announced that this year, the older folks present included ten veterans of the big PMC ride, with a cumulative total of 100 rides. (Among the veterans were Suffield’s former economic development director, Patrick McMahon, and Chris, himself.) This year the Kids Ride Quilt sewn by Chris’s mother with T-shirts and other decorations, which had been awarded yearly to notable adult volunteers, was given (permanently) to Krystal and Dan Holmes, whose volunteer support had been particularly helpful from the beginning.

Next Article
Annual Packard Golf Tournament
While it is hard to believe, on Friday August 9, at Oak…