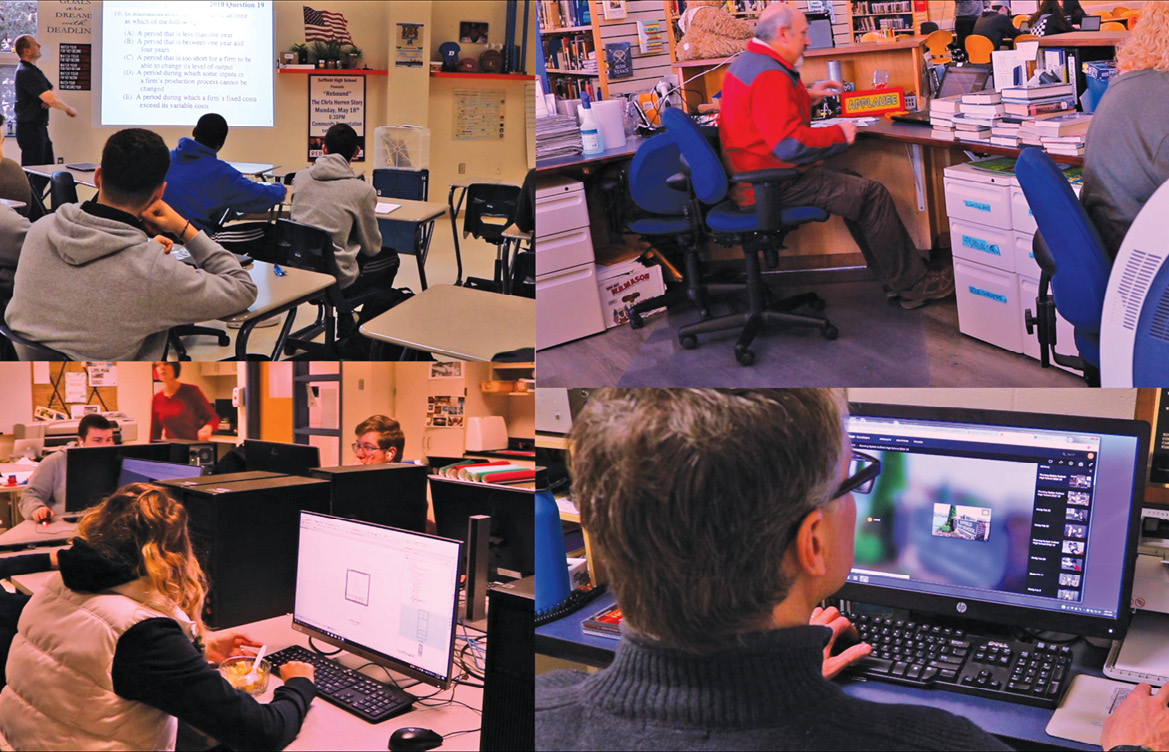 These images show scenes from the author’s Video & Television Production class at SHS.

This semester the students of the Video & Television Production class at Suffield High School have been very busy producing a wide range of projects that have been extremely beneficial for our school. At the outset of the course, groups produced a series of Academic Integrity pieces that were shown as public service announcements to our school for this very important issue. One produced by Dylan Angus, Kaylee Brousseau, and Olivia Dalfino addressed possible consequences of cheating through some well-earned laughs, while another, created by Emily Fabrizi, Fatima Elmokaddem, and Ethan Krar, used interviews to convey a strong message about the importance of academic integrity and share thoughtful teacher perspectives on the issue.

Next, the class worked in collaborative teams to produce a highly complex piece that was shown at the bi-annual SFES fundraising dinner. This motion picture, intended to promote the purchase of TouchIt boards at SHS and SMS, was directed and edited by Olivia Dalfino and Emily Fabrizi. It featured students Daniel Casinghino and Ethan Krar, with cinematography by Charles Rose along with our co-directors, and the project was successful in its goal: the full amount of money was raised at the event for this major purchase for our schools!

The list of major accomplishments goes on: several news features have been created that are currently being submitted to the Connecticut Student News program through Fox 61, including ones on the Ag Expo and Sex Trafficking in the state, along with a piece on the reopening of Kent Library, by Manny Meleounis. In addition, many PSAs have been produced for a community anti-substance abuse and mental health awareness campaign. Our semester is not over yet, and more projects are in the works by this talented, hard working group!

Next Article
Student Awarded for Kindness
Congratulations to Jenna Woods, who was chosen to receive the ShopRite Kindness…