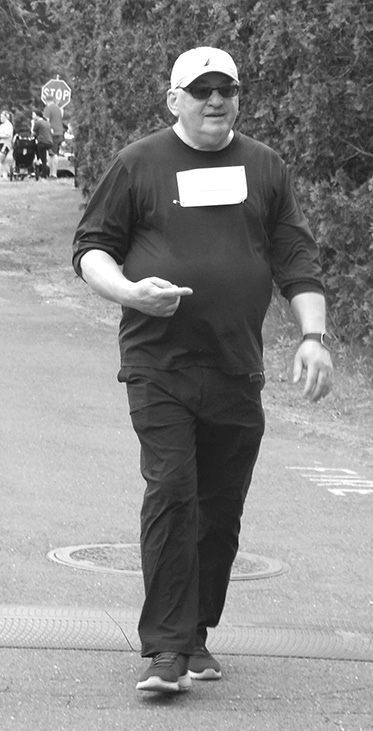 Jerry Bland strides across the electronic timer as he finishes the 2019 Fireman’s 5K on June 2, the last one to complete the course. In spite of his being last overall, he received the Paul Simison Healthy Spirit Award for his long participation in the yearly event and his dependable support.

The Suffield Firemen have seldom selected a race day with more perfect weather than what prevailed on the morning of June 2, when firefighter Sam Ho blew a blast on his air horn and the Paul R. Simison Memorial Annual 5K Road Race began. (Chief Chuck Flynn would have been the starter, but he was a bit lame that day.) A bit more than 17 minutes later, Suffield Academy freshman track team member Jack Lynam, age 15, was the first to cross the finish line, timed electronically at 17:21, for a pace of 5.35 minutes per mile. The online readout listed that kind of data for each of the 131 finishers.

No. 131, at 1:02:18, was Suffield fire commissioner Jerry Bland. He was in good spirit, evidently far from exhausted, and happy to have completed the race. He sets a good example for his insurance agency clients. In the award ceremony a few minutes later, Nancy Simison (Bib #1, Finisher No. 112, at 45:02) named Jerry this year’s winner of the Paul Simison Healthy Spirit Award and handed him an impressive trophy. Many others received trophies for their performance and for a number of raffle prizes.

Among other notable participants, Suffield Academy was well represented, including science teacher Andrew DesBois (No. 2 at 18:53) and history teacher Beth Krasemen, the first female to cross the finish line (No. 7 overall at 20:55). Little Davin Gauthier, 6, seemed to be the first of the very young finishers (No. 62 overall at 31: 40). He sprinted across the line 13 seconds ahead of his mother, Nicole (No 64 at 31:53) and 21 seconds ahead of his father, Brian (No 65 at 32:01). Almost three minutes after Davin, the littlest female run/walker finished. This was Gienna Ruggiero, 5, (No. 124 at 54.36). There were no superannuated run/walkers this year; Sarah Segar, who was first female over 90, last year, did not participate in the Firemen’s 5K this year. She won her bracket this year two weeks earlier in a 1500-meter run/walk in New Britain. (We hope to see you back in the Firemen’s 5K next year, Sarah.)

The race this year was a good deal smaller than last year, perhaps mostly because of the popular Dustin Doyon road race eight days earlier, which attracted many Suffield High School runners. The large group from Dr. Markowski’s dental team decided to run only for Dustin this year. (See Page 10.) The dozen or so members of Paul’s Peeps, with their distinctive blue T-shirts, remained loyal to Paul Simison. Both events had many more participants than are needed for a successful event. Both causes are worthy, and Suffield is surely big enough for both races.