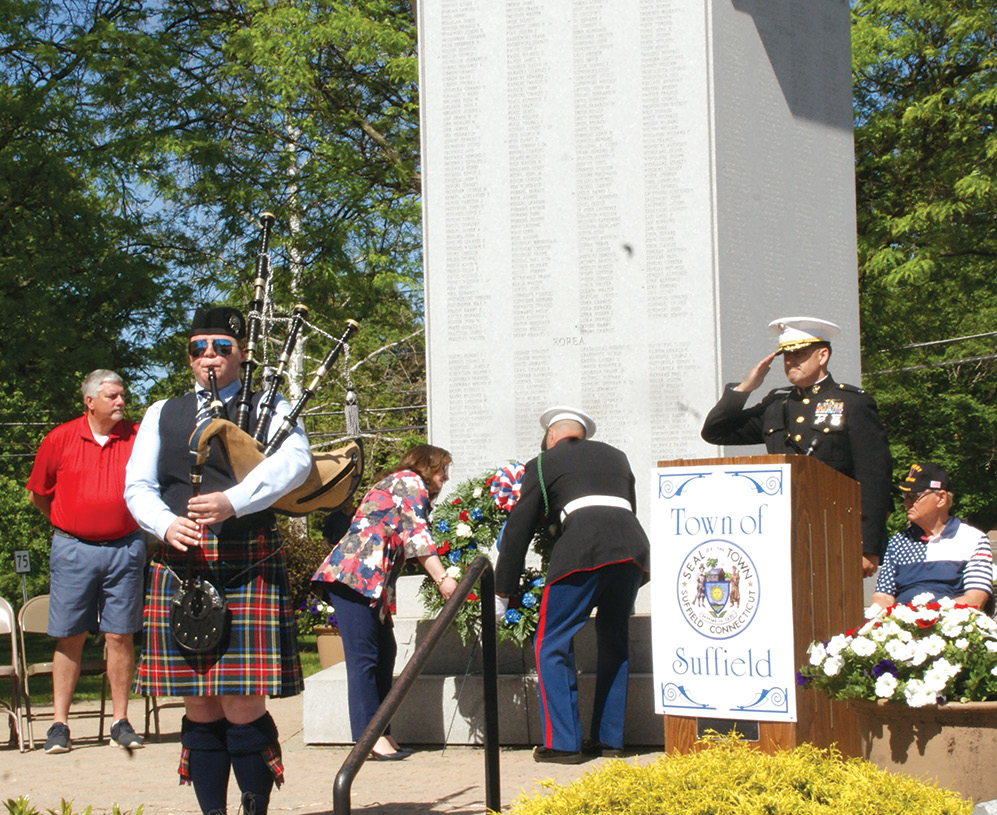 Photo by Lester Smith Grace Domoshinski plays “Amazing Grace” as First Selectman Melissa Mack and an assistant lay the Memorial Day wreath on a tripod next to the Veterans Memorial. Lt. Col William Moryto, officer of the day, salutes at right.

Hundreds of Suffieldians applauded the town’s traditional Memorial Day parade (on May 27 this year) and enjoyed the pomp and ceremony at Veteran’s Park – and those who could hear appreciated what was said. For those not standing close to the Veterans Memorial and the loudspeakers: the ceremony differed in several ways from the usual.

The Pledge of Allegiance was led, charmingly, by the Daisy Girl Scouts of Troop 10994. The opening remarks by First Selectman Melissa Mack were a bit less brief than typical, including some appropriate poetic references. The Confession of National Faith, read well by young Brooke Tillotson, seemed less tedious than before, and Lincoln’s Gettysburg Address was read in two parts by two students.

Principal speaker Lt. Col. Michael Domashinski, USAF (Ret.), spoke at some length about his experiences and his feelings piloting transport aircraft whose cargo was sometimes the flag-draped caskets of slain soldiers, beginning with the U. S. invasion of Panama in 1989. Recounting the human cost of the Vietnam War, the Persian Gulf War, and the continuing global war on terrorism, he stressed the importance of remembering those who paid that cost, for which Memorial Day was established.

A sweet addition to the customary wreath-laying this year was that an excellent version of “Amazing Grace” was played during that ceremony by Grace Domashinski – on bagpipes!

And after Taps, the “Star Spangled Banner” was sung, for the first time in recent memory, by a male soloist: Ben Gregoriou. It was a superb rendition.