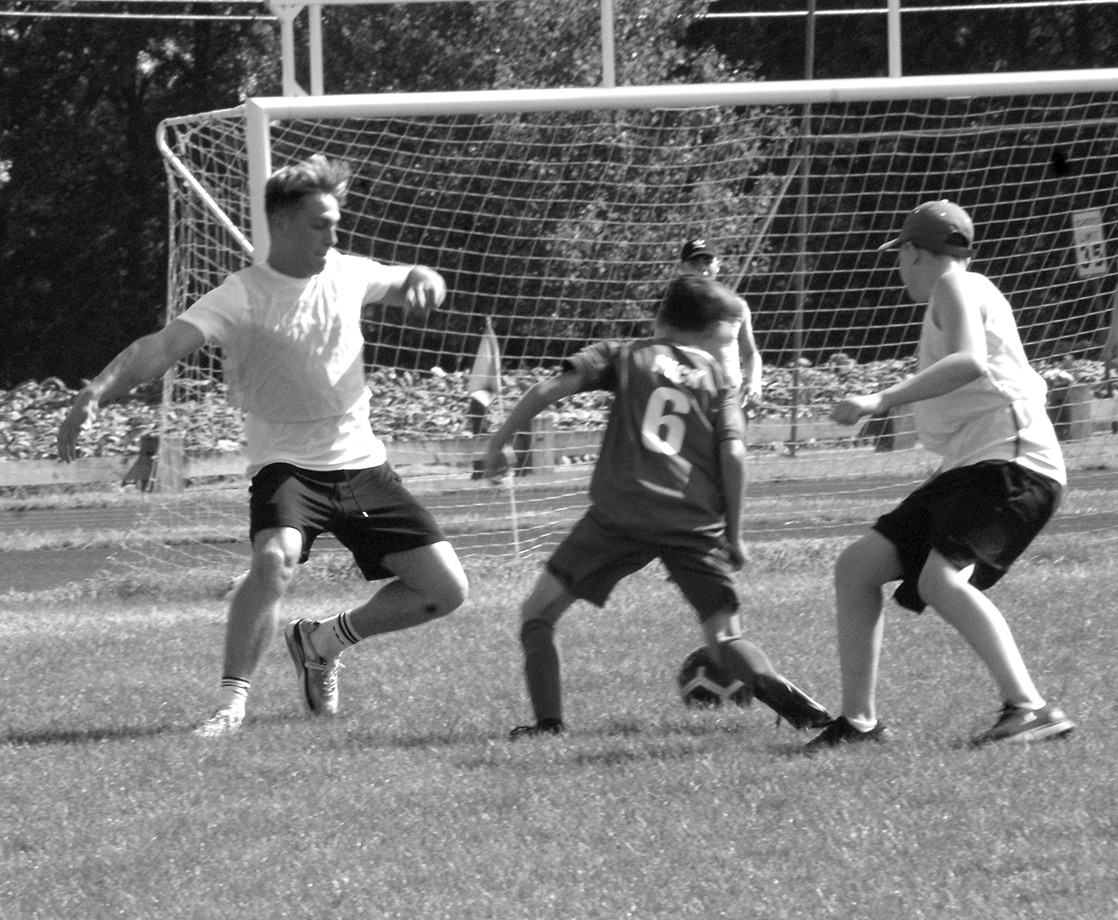 Suffield’s Andy Mack seems to have control of the ball, but two big players from Ireland, Karl Fitzpatrick and James Henkel, are closing in. The August 4 game at the SHS field ended in a 2 – 2 tie.

For a week in early August, Suffield was the focus of a substantial party of international tourists. Fr. Mark Jette of Sacred Heart and St. Joseph advised the Observer that he had arranged for a team of young athletes from the town of Wicklow, in County Wicklow, Ireland, to come and visit.

The athletes were all from the Wicklow Soccer Club: twelve girls and seven boys of middle school age, plus parents and coaches for a total of 51 visitors. On three of their days here they played basketball at Suffield Academy and soccer at Suffield High against players from Suffield Middle School and the Suffield Soccer Club recruited by Coach Mark Sullivan. The Gaelic football event didn’t turn out to be a game, just some time spent demonstrating the play, which is neither soccer nor football by either definition. The kids swam several times at the Suffield Country Club pool.

The one soccer game this reporter watched ended in a 2 – 2 tie. It was refereed by Dan Rooney of Ireland and Glastonbury, a friend of Fr. Jette. The kids seemed to mingle well on the field and in the pool.

The visitors managed to spend a day shopping at the Clinton Crossing outlet stores, an afternoon at the Basketball Hall of Fame, a day at Six Flags, another day at the Brownstone Quarry water park in Portland, Conn., and a day in New York. One mid-visit day was scheduled as free.

Coincidentally, the principal minority group in Wicklow is Polish, and Polish is the second most common language, after Gaelic. English is third, but all the visitors seemed thoroughly conversant with it, many with only a trace of that charming brogue.

Next Article
Waldo… “Revisited”…
As previously reported, I first spotted the barred owl in late December…