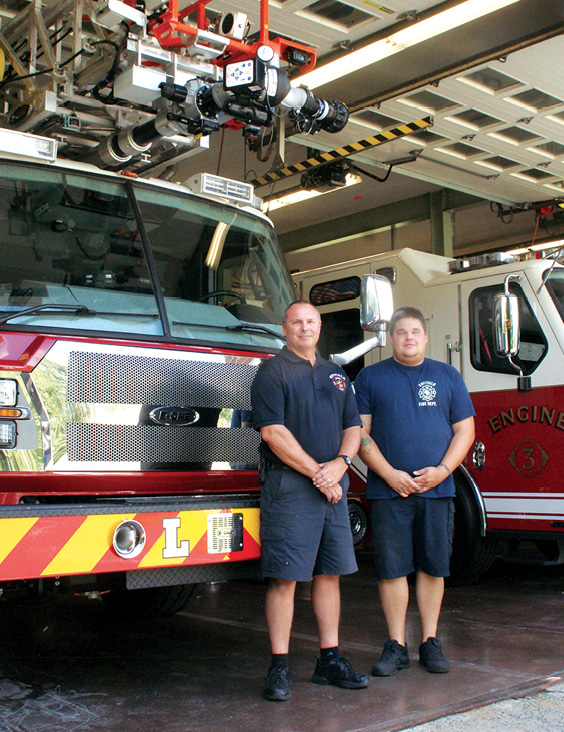 Fire Lieutenant Kevin Seger, left, and Fire Fighter Dan Gordin are pictured in front of Suffield’s new Ladder 1 fire engine. New Engine 3 is in the bay at the right.

It was March 2017 when the Town voted to approve $2.8 M in bonding for the purchase of three new fire trucks, replacing others that had become too old to keep safely in service. Rescue 1 was delivered this year in May. On Monday, August 5, Ladder 1 and Engine 3 arrived in convoy at the Central Fire Station, having been driven there from North Attleboro, Mass., by Kevin Seger and Tyler Colby. The two Suffield fire fighters had gone to fetch them from the manufacturer’s agent, where the final customizing was done. All three trucks were manufactured to order by E-One, in Ocala, Fla., a fire equipment supplier popular in the South with growing popularity in the North.

The new Ladder 1 truck includes carefully specified equipment and many improvements. It is six feet shorter than the old ladder truck and provides a 100-foot ladder, five feet longer than before. Conveniently, it clears the station’s door height without lowering the hydraulic suspension, which had been necessary before.

The new truck includes a 500-gallon water tank; the old one had none. The ladder and its attached nozzle can now be controlled from a portable module. Another controllable nozzle extends up from a spot on the deck behind the cab. The compact outriggers (for stability when the ladder is extended) occupy less space than before. Lighting is improved, including green lights on the extended ladder, so its position can be seen more easily by the fire fighter controlling it. (Green shows best through the smoke.) There are more compartments for special equipment. And lots more than that – fire engines are complicated machines.

The second truck that arrived August 5 is Engine 3. It carries a 750-gallon water tank and 30 gallons of foam. There is a controllable deck nozzle and also connections for hoses. It has many of the new features of the new ladder truck, as well as more big storage bins on the sides of the “walk-through” upper deck. This truck will normally be stationed in the Ebb’s Corner fire station.

Rescue 1, delivered in May, is configured to carry a large quantity of rescue equipment. It can carry a heavy load, but it has no water storage tank. Along with Ladder 1, it will customarily be garaged in the central fire station, next to Town Hall. It was featured in Suffield’s Memorial Day parade.

The most important feature of all three, of course, is that they are new and up-to-date. Old fire engines are typically kept in such clean and shiny condition that it is hard to appreciate their age and the difficulty of keeping them in operable condition. Many replacement parts become unavailable for engines that qualify for “antique” license plates, as ours did. The Town’s policy has been to replace fire engines at age 25 to keep Suffield’s favorable ISO rating, which affects fire insurance costs for everyone. The previous ladder truck was acquired in 1991 to reach out over the new prison and large industrial buildings in town. Its cost was supported by a State grant in connection with the prison.

Next Article
September Commission Meetings
Commission meetings are open to the public.