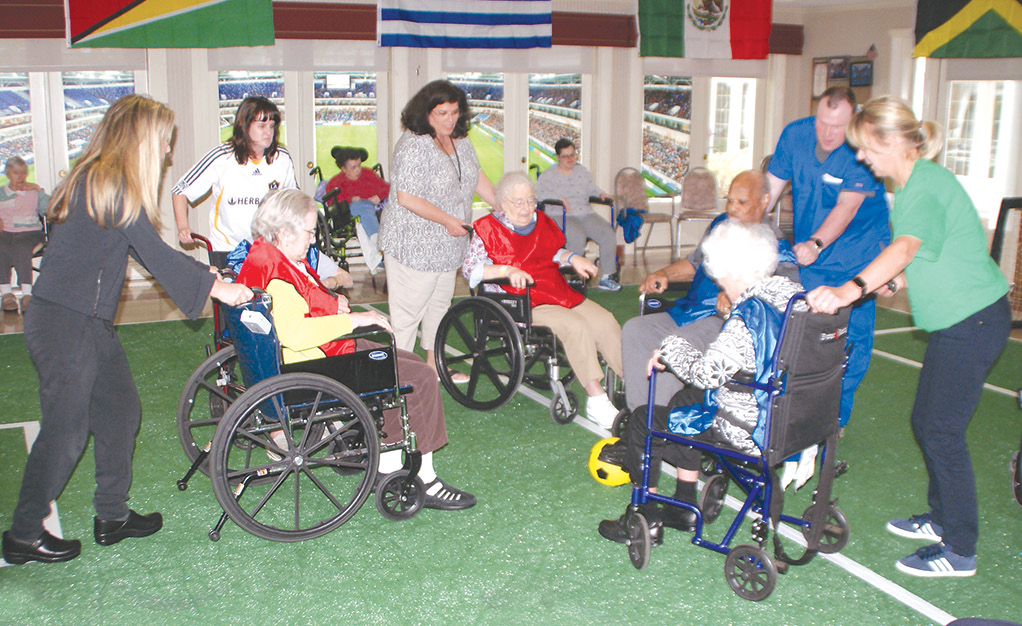 The blues and reds try to get into position for a kick to one of the goals in this game of wheelchair soccer at Suffield House. The setting is nicely enhanced by translucent mural panels showing a big sports stadium seen through the rec room’s French doors.

In case you missed it, the week of May 12 was National Nursing Home Week, and our local nursing home, located down by the Connecticut River, decided to take a cruise on the S. S. Suffield House. With many foreign ports of call, passenger-residents enjoyed exotic experiences like “Tea with the Queen” and a Mexican fiesta.

At the second Port of Call, this reporter was invited to attend “FIFA LIVE,” the first round of a futbal tournament. (Americans might call it soccer.) With limited space on deck, the field was small, so each team had only three players in red or blue over-shirts, with staff members pushing their wheelchairs around the soccer markings on the green carpet. Recreation Director Brian Hickey, in a properly striped shirt, was the enthusiastic referee for the short games, often doubling as coach. The games were a bit slow, but the action was often interestingly competitive, and the audience of staff and residents added their encouragement. Understandably, there were no headshots and the ball seldom left the floor, but it was a fun activity for all.

Next Article
It’s That Time of Year – Medicare Coverage Checkup
We all have annual tasks to complete. We pay our property taxes,…