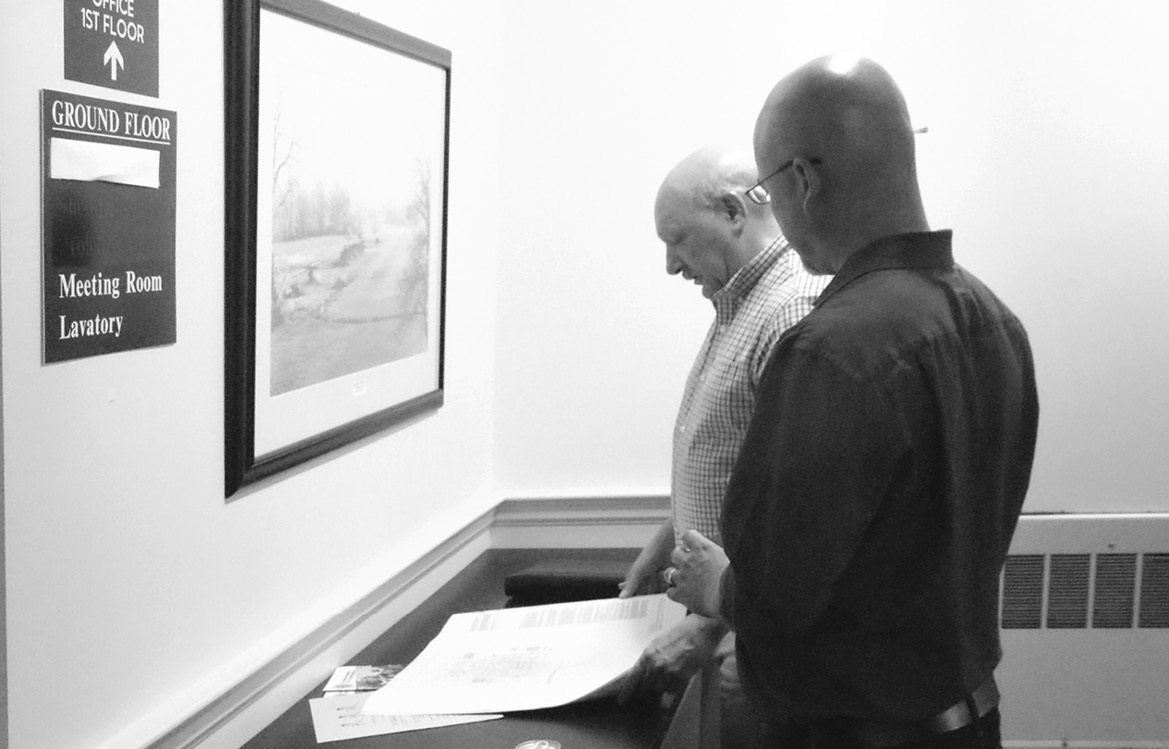 In the lower lobby of Town Hall, Facilities Manager Chris Matejek, front, discusses renovation matters with a representative of CES, a Middletown company concerned with mechanical, electrical and plumbing (MEP) in the planned renovations.

In the Observer’s last report, the contract for the Town Hall Renovation project had been sent to Gilbane, the chosen “Construction Manager at Risk,” but had not yet been signed. The signed contract arrived in mid August, QA&M Architecture had already signed, and initial work had begun, principally in architectural layout and planning for basic systems: mechanical, electrical, and plumbing (MEP).

Initial concepts for how to lay out the spaces in our renovated Town Hall got off to a slow start when architect Angela Cahill of QA&M presented rough sketches of five different layouts to the Permanent Building Commission (PBC) on July 11. Other officials were present in addition to the PBC, including First Selectman Melissa Mack and Building Inspector Ted Flanders, and the consensus was that none of the offered layouts were quite right, but it was a good start.

Two Gilbane representatives reported on their conceptual budget, whose very preliminary estimate is a bit over the available $3.2M, but seemed acceptable considering the early stage of the work.

Architect Cahill returned to the Permanent Building Commission meeting on August 15 with multiple copies of large drawings and narrative descriptions. The drawings offer two alternative configurations, differing only on the ground floor. One configuration accommodates all the departments that had for a number of years been housed in rented quarters at 230 Mountain Road as well as those that remained in Town Hall. This requires relocating the expanded Town Clerk’s Vault to a ground floor extension of the Town Hall. The other configuration assumes that the Town has acquired a new highway garage on South Street, where several departments would be moved to surplus office space available there. This case allows the expanded vault to be located in part of the ground floor space that is now the Selectmen’s meeting room. Both configurations offer open space offices, where several related departments share a room with a long counter for engaging with the public.

Both configurations incorporate the same first and second floor layouts, with a large conference space in the entire west side of the first floor.

There were many matters yet to be settled. Cahill said she would have more to show at the next PBC meeting, probably on September 19.

Next Article
Try harder at being nicer
A couple of years ago, while sitting in on my daughter’s basketball…