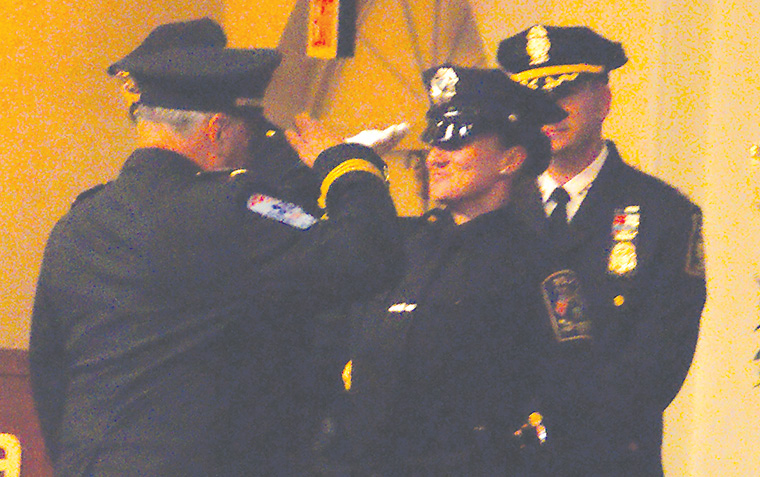 For the second time this year, a Suffield High School graduate has successfully completed the 31-week certification program at the Hartford Police Academy. Kristina Miner, daughter of Don and the late Deb Miner, celebrated her new graduation along with 28 fellow graduates at an impressive ceremony October 11 in the Aetna auditorium. She will now become a probationary police officer in the West Hartford Police Department.

Kate Butler, SHS 2013,  completed her Hartford Police Academy program eight months ago (The Suffield Observer, April 2019), and is now a Hartford police officer. She followed an impressive family tradition of law enforcement and investigation from both her father and her mother. In Kristina’s case, her mother was a Suffield teacher, and her father is the Vice President of the Suffield Volunteer Ambulance Association; he has served 29 years with that public service.

The graduation ceremony, attended by a packed crowd in the 1,000-seat auditorium, comprised 29 graduates: 19 planning to remain in the Hartford Police Department and ten more heading for four other towns. One third were women. For those staying in HPD, according to The Hartford Courant’s review of the event, half were women and over three-quarters were African American or Hispanic – a most representative class.

In his keynote address, Mayor Luke Bronin welcomed the neighboring towns’ graduates and hoped that their training will lead to more cooperation among towns. He spoke of the value of working with community groups, and mentioned National Night Out in that context. (Suffield didn’t observe that event this year.)

Suffield’s Kristina Miner, SHS 2003, was a noted athlete in high school, honored as All-State and All-New England in track and field. Her biography in the Suffield Athletic Hall of Fame (2012) tells of her prowess in high school and her high honors in track and field at Trinity College. But it goes on to summarize what happened in December of her sophomore year, when she was severely injured by a passing car as she neared her home on Mapleton Avenue one night after an eight-mile run. The biography summarizes Kristina’s story of tremendous courage and determination in her rehabilitation, returning to compete at a high level. The Hartford Courant told the story under the headline, “A Miner Miracle that Runner is Back.”

Kristina studied part-time at Trinity during her recovery, graduating in 2008 with a degree in public policy and law and a focus on human rights and international law. During graduate study at Trinity, she coached track and field and cross-country. Her 2011 master’s degree was again in public policy and law, but her focus had changed to economics.

During her graduate study, Kristina had worked part-time as an intern at Hartford Steam Boiler Inspection and Insurance, so it was natural to accept a full-time job offer there. In 2015, she was selected by the Hartford Business Journal for their yearly list of “40 under 40” outstanding young professionals. She left Steam Boiler in 2018.

As a probationary police officer, Kristina will be riding and working with her field training officer. She will have no power of arrest. She will be fully certified when she successfully completes the 12 to 16 weeks of on-the-job training. Her previous education may now result in future growth in law enforcement. She says that the West Hartford Police Department (about 130 officers) has “great specialized teams.” For now, Kristina has her sights set on the detective specialty.

Next Article
Hilltop Farm Updates
Although it may not be obvious, Hilltop Farm is now much closer…