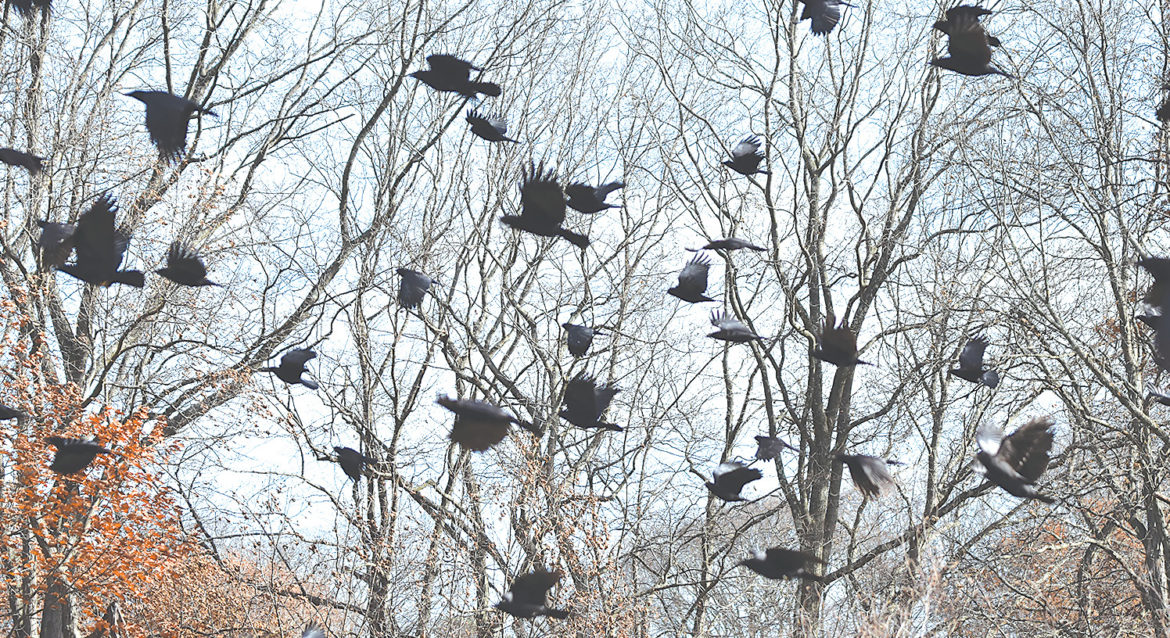 A group of crows, also known as murder crows, heads off to roost for the night.

One November night in an attempt to get away from my roommate’s clutches, I toddled down to the triple on the other side of the dorm where my friend lived. There, as the skies were darkening, my friend told me about the night she lost her dad. He had been ill, but the story was still heart-wrenching and almost beyond belief, as I had led a sheltered existence, thankfully, in that department. I must say she was a good story teller, eyes bugging out, pregnant pauses, hands gesticulating as she filled in the details of that awful night. One of those details, which has stayed with me for all these years, is the part when a crow flew into the window and became trapped in their house on the dad’s final night. The family had gathered, and they knew this was not a good sign. They and the crow were right. Crows have been considered to be the harbingers of doom, and my friend’s story supported this thinking. I have often wondered why a crow would navigate itself into the window. But I have never asked my friend, as some stories are best left as they were told.

I remember my friend when I see crows gathering through fields or cawing at me from the telephone wires, and they are doing plenty of that these days. With their breeding season behind them, the crows are out scavenging, feeding on the ground and eating almost anything, including worms, fruit, insects, garbage, and carrion. In the spring, crows build a bulky nest of mostly sticks lined with soft moss, and lay between four and six eggs. When the young hatch, they are tended to by both parents and by their siblings from previous generations who have yet to go off and raise their own families. Crows take several years to mature, and this is advantageous to each new clutch as the crows model the “it takes a village” approach to rearing their offspring. These helper crows can fine tune their parenting skills before shacking up on their own. The helpers are usually youngsters from another brood, and they are quite willing and capable of bringing that next batch of pink-skinned, chirping flesh along to maturation. Going full circle, when an elder crow draws its last breath, other crows have been known to stand vigil over the body. Perhaps they are the sending the passed crow off or contemplating life and death in their crow world. Needless to say, crows are considered one of the smartest birds, and they have adapted well to life among humans. Crows have been known to recognize and voice their opinion regarding human facial features and react accordingly, not necessarily hiding their true feelings. They are crafty and may choose to follow other birds to seize whatever food they may have or to wreak havoc with their nestlings. To top off all this sophisticated behavior, they have been observed using tools. A captive crow used a cup for water and wild crows are resourceful enough to shimmy a stick down a hole in search of some pretty tasty insects. You don’t see sparrows doing that!

But for me, the most intriguing thing about crows is their communal roosting. I have read that large numbers “into the thousands and beyond” may assemble at night to call it a day. I am fascinated by this and by sleep in general. Sadly, I rarely have the opportunity for sleeping en masse now. Those days of slumber parties, sleep away camps, Floralia, and dorm living with six or more college students squeezed into a triple are mostly gone. As I recall, we had an open door policy. It never mattered whether there were enough mattresses; we just squeezed in, woofers and tweeters turned up, shenanigans recapped, relationships tested, love lives scrutinized within those four walls and into the wee hours. Grand plans for hitchhiking across the country in the summer were being hatched; school work was the furthest thing from our minds. Somehow amidst this chaos with all those warm bodies, we were able to nod off. And we slept like babies. As glamourous as that all sounds, I marvel at the ability I once had to cohabitate like that as now if my partner blinks or a leaf falls off a nearby tree, I am awake for the rest of the night.

And when that happens, you can bet I am thinking about crows and wondering where they are holed up for the night.