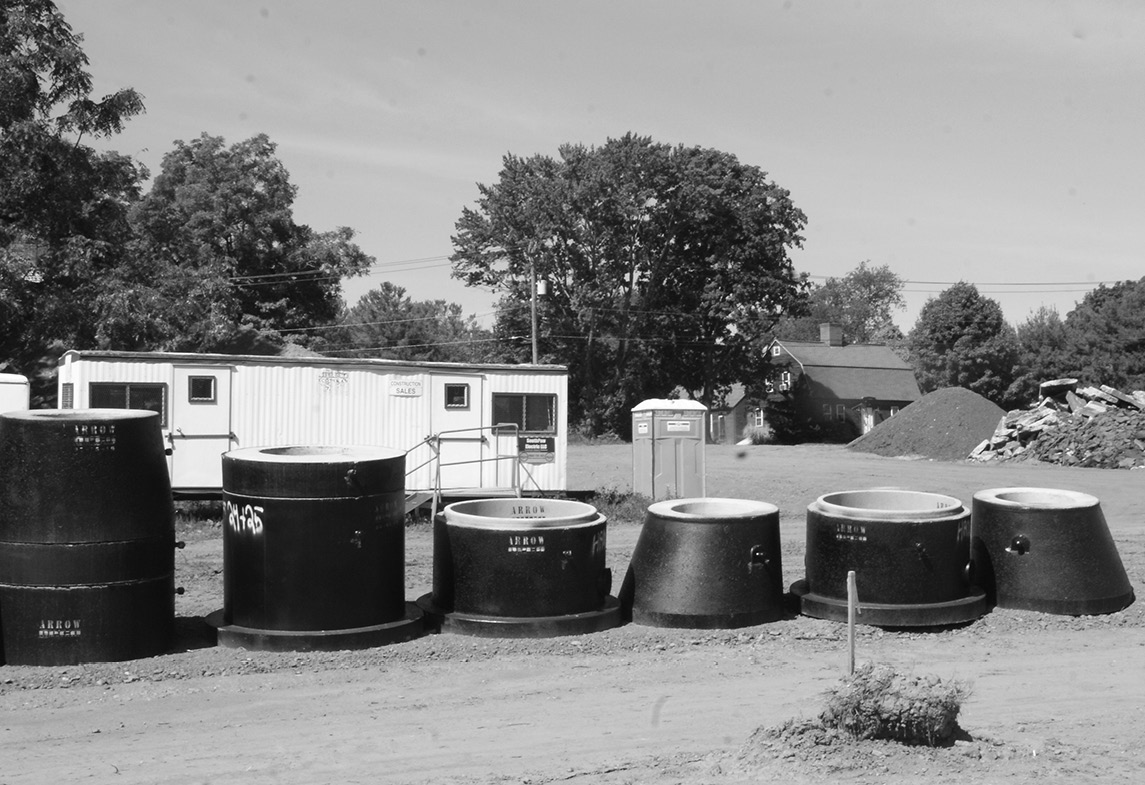 Site development is under way for The Hamlet at King’s Meadow, a 21-lot subdivision on East Street South. The ancient house across the street in the background is the Anthony Austin House, arguably the oldest house in town.

Site preparation is under way for a subdivision at 414 East Street South, three-quarters of a mile south of Bridge Street. The 40-acre parcel is on the east side of the highway, and about half of the land will be left undeveloped. The planned short road into the development will serve 20 new homes and the old King family home, which will be renovated.

This property had been bought by Hamlet Homes from the estate of Dan King in 2017. It was considered in 2018 for an apartment development, with open space for which Mark O’Neal, the developer, described a winery and a recreation area, with a bridge over the canal to allow swimming in the Connecticut River. That apartment development was not approved by the Planning and Zoning Commission.

The present subdivision plans were disclosed in a pre-application conference with PZC on January 28 this year. They were approved by the Conservation Commission and PZC in April and May, respectively, with adjustments and requirements recommended by Conservation Consultant Keith Morris and Town Planner Bill Hawkins. There were also additions responding to neighbors’ concerns expressed in the required hearings, and changes from the commissions’ deliberations.

Called the Hamlet at King’s Meadow, the development will leave 26 acres as open space to be managed by a homeowners association or the Suffield Land Conservancy, which has expressed a positive interest. Much of that acreage is designated as wetland. On the developed acreage, the 20 new houses and Dan King’s old home (ca. 1800) will be accessed by driveways off a road winding through the property with two short cul-de-sacs. When explored recently by this reporter, the construction work was in the process of installing storm water drains and other site work. Signs posted at some of the house lots pictured the proposed dwellings, offering four traditional designs, all of moderate size with garages for two cars each.

The new homes in The Hamlet at King’s Meadow will be across the highway from the Anthony Austin House, which may be the oldest house in town. The location is also where King’s Ferry offered access to Enfield many years ago.

Next Article
100 Years Ago in Suffield
Rev. George D. Reid, aged 70 years, a native of this place,…