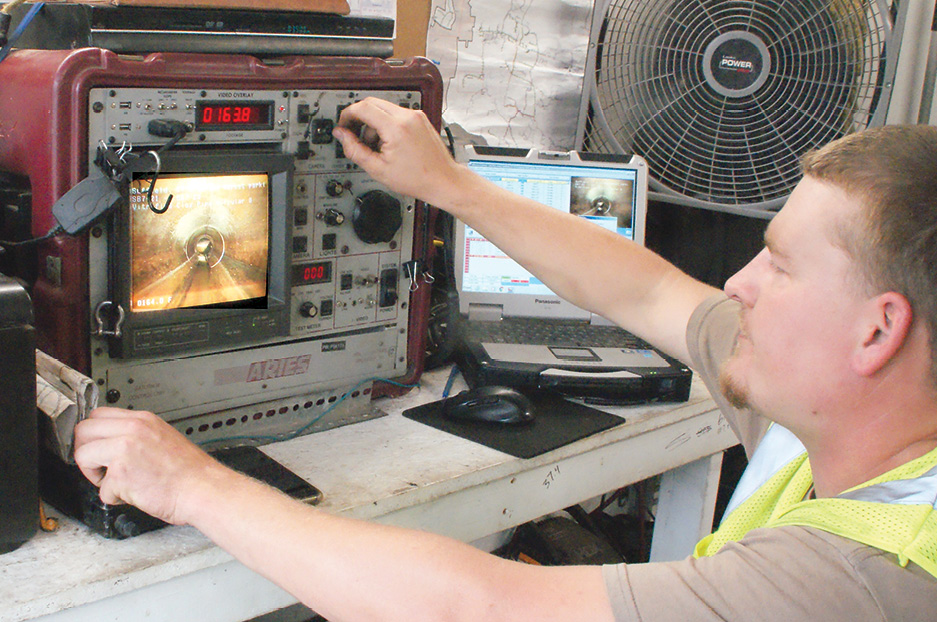 Operator Derren Slack of Green Mountain Pipeline Services watches carefully as he moves his camera down the sanitary sewer pipe under Bank Lane. He was part of the crew doing the regular clean-and-inspect required every five years.

By State regulation, Connecticut towns that have sanitary sewer systems must get their pipes cleaned and checked every five years. So the Suffield Water Pollution Control Authority contracts with Green Mountain Pipeline Services, a Bethel, Vt. company that specializes in servicing pipes of all kinds. For Suffield, they send crews to flush out and look inside the sewer pipes. To spread the cost, the WPCA plans to schedule about a fifth of the pipe system each year. This year, the work was scheduled for September through November.

The Town website warned that this was to happen, listing the streets affected and asking residents to keep their toilet seats down, as the process sometimes causes bubbling or worse. Additionally, the warning advises that cellar drains be covered, which seems odd, as such drains are not allowed to be connected to the sanitary sewers; they are supposed to be connected to storm water drains of various kinds.

Green Mountain uses two trucks: one big tank and suction truck that sends a high pressure spray nozzle down the pipe then pulls back, scraping any residue back to the manhole, where it can be sucked out. The other truck pulls a trailer with the closed circuit TV camera and its support equipment, where the movement, view direction, and zoom of the camera is controlled. The operator moves the camera down the cleaned pipe, watching his display screen and making whatever notations are necessary.

This reporter was allowed to observe two men from Green Mountain at work on Bank Lane inspecting the pipe segment alongside PeoplesBank. The spray/sucker truck was parked nearby. Derren Slack was at the control panel, moving the camera down the pipe and pausing to look around at possible problems. When he reached the manhole under Bridge Street, he looked east and west, but the long, six-wheeled camera carrier can’t turn corners. Then he brought the camera back, with its tether cable reeling up on a big spool. At the manhole by the open end of the trailer, Ben Tucker had been assuring that the cable was unreeling safely; now he made sure it was coming back properly. When the camera reached the manhole, he hauled it up and out with a chain leash.

When problems are seen, records are kept for possible treatment. Small root encroachments can be cut out, and liners can be inserted (something like a stent?). Some problems may require excavation for repair.

Derren and Ben explained that they drive down from Bethel on Monday mornings each week and stay three nights in a Windsor Locks hotel, returning to their base on Thursday evening. Their equipment spends nights and weekends at the Suffield treatment plant.