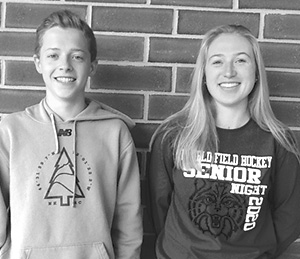 Congratulations to Nora Shanks and Charles Brydges for being named the male and female scholar athletes for the Class of 2020. They were nominated to receive the Connecticut High School Coaches Association scholarship. In order to be nominated, students must have earned at least one varsity athletic letter, have achieved a minimum academic average of 3.0 and have demonstrated exemplary citizenship and leadership. Out of all the students nominated throughout Connecticut, four $1,000 scholarships will be awarded to the top two boys and top two girls selected by a committee.

Coach Casolari commented, “I have worked with Charles both in the classroom and on the athletic field, and he is an exceptional leader in both areas. Most impressive to me is his solid character and willingness to work with others.”

Coach Casinghino offered, “Nora’s leadership, intrinsic motivation and positivity shine through on the field hockey field. She is the student athlete that every coach wants on their team.”

In the spring, these two students will be celebrated by the CIAC at a banquet honoring all the students nominated. ongratulations Nora and Charles!