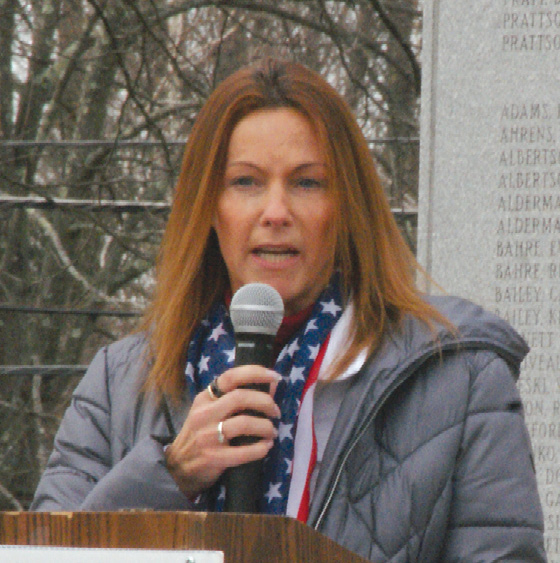 On Veterans Day in Suffield, local resident Donna Chapman speaks of her effort to create a retreat center for troubled veterans.

Government offices on all levels were closed on Veterans Day, along with banks and the U.S. Post Office. Like most businesses, Suffield schools remained open, along with most other schools statewide, with the day’s significance to be discussed in classrooms and assemblies. And on Veterans Park in Suffield, at 11 o’clock on a cloudy but temperate November 11, about three dozen folks gathered to observe this significant national holiday.

Jim Hunter, U. S Army Ret., a former commander of the Suffield VFW and the regional district, welcomed the gathering and asked Paul Rhoades to open with a prayer, which was nicely meaningful. First Selectman Melissa Mack followed, offering a comment about the freedoms obtained and preserved by American veterans, and the thanks they deserve. She added her own thanks.

Then Donna Chapman spoke. She is a West Suffield resident who lost her son William to suicide in 2017 after his Army National Guard service. In a mission to build a free retreat center for veterans and first responders who suffer in similar ways, she has created a non-profit organization called the Will Power for Veterans Fund, Inc. She announced that she has already raised $75,000 toward that cause. (www.willswill power.com)

Next, Jim Hunter, reportedly on very short notice about the expected speaker, spoke again. He commented on how Armistice Day, with observances at 11 o’clock on the eleventh day of the eleventh month, the very time of signing the armistice that ended the First World War, had been renamed Veterans Day in 1954 after the Korean War. He said that Veterans Day now honors not only those who have served their country, but also those who are currently in service, and he urged us all to help maintain our freedoms to vote, to speak out and to volunteer.

Joanne Rhoades then set the ceremonial wreath at the base of the Veterans Memorial, a three-man rifle squad of the VFW fired three salutes, and the observance came to an end.

Next Article
Music is a Unifying Element
Rituals at holiday times enrich all our lives, and Suffield has lots…