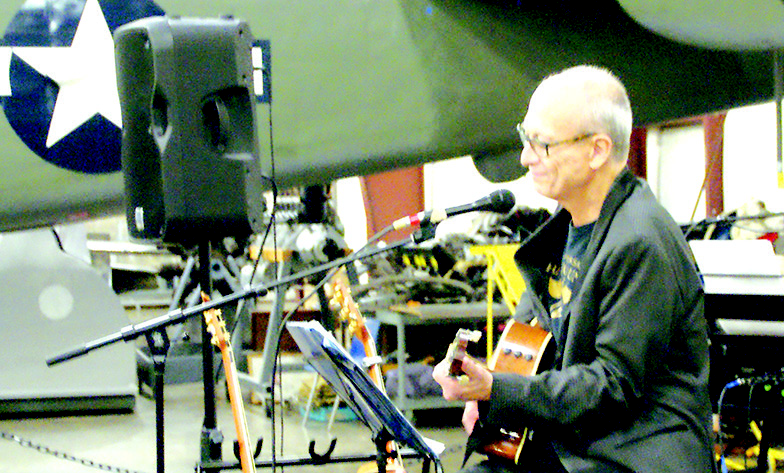 Under the tail of a WW II bomber, talented performer-composer Lou Sorrentino of East Windsor sings his new ballad, Suffield – A Town with a Heart. This specially composed piece was part of his volunteer performance at the New England Air Museum during the 350th Beer Fest in November.

Lou Sorrentino of East Windsor was wandering as a minstrel through Suffield on the Green last September, singing with his guitar just for the pleasure of the experience, when Caroline D’Otreppe, a member of Suffield’s 350th Anniversary Committee, saw him and had an inspiration. She found that he enjoys entertaining, both for hire and volunteering, and he also occasionally writes ballads on demand. After some discussion, Lou agreed to put something together about Suffield.

This experienced, multi-talented volunteer (who is a Licensed Alcohol and Drug Counselor often appearing in court as an expert witness) gets nice balance from his love of music.  He set out to learn about Suffield, and his volunteer performance at the 350th Brew Fest included an evocative ballad full of references to elements of Suffield life over the years. It was a diverse compendium: eagles, cigars, farms, Graham crackers, canals, immigrants, and lots more. Lou was evidently impressed with the volunteer efforts many Suffieldians have exerted to help those in need of sustenance and other tangible assistance along with simply the sensitive recognition of their particular situations. He called his ballad A Town with a Heart, and he ended with the lines, “No matter what the future brings, we will laugh and we will sing. Echoing across the land – Reach out, Lend a hand!”