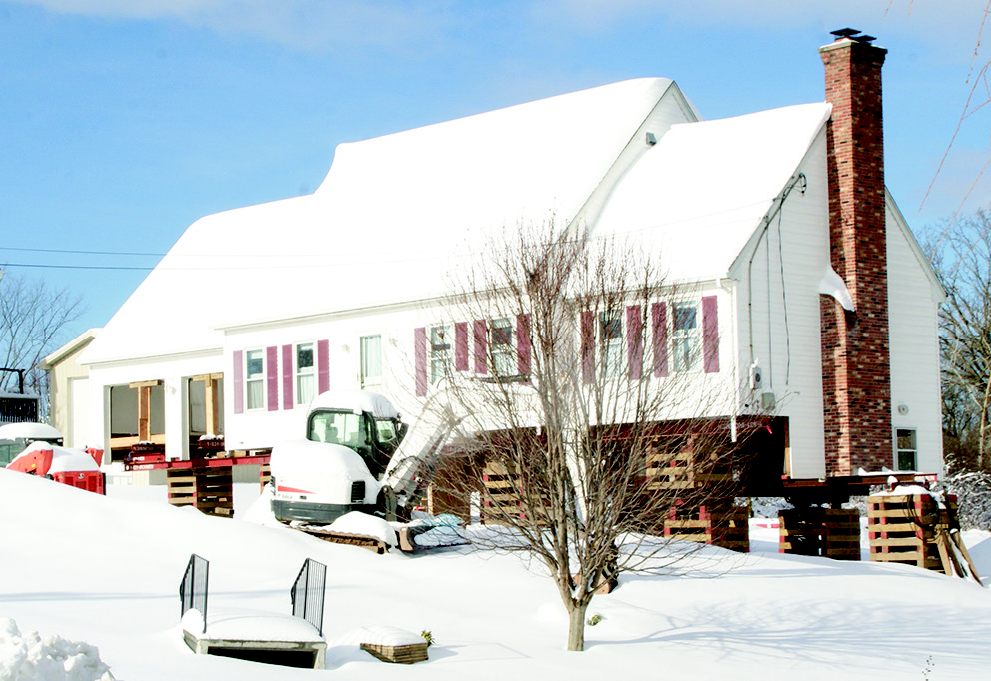 This home on Austin Street, photographed on December 3, has been jacked up for the construction of a new foundation. The family expected to be back home in early February.

Connecticut news has been full of stories about all those crumbling foundations discovered under houses in eastern Connecticut. It turns out that some of the pyrrhotite-contaminated concrete found its way across the Connecticut River, and Suffield has identified about half a dozen cases of crumbling foundations in town. Here’s a story of one of the first to be repaired. It turned out pretty well, and Joe and Karen Kreuzer provided a very friendly interview for the Observer.

Married 30 years now, the couple moved into their home on Austin Street in 2007 with their adolescent daughter and young son. Jordan is a mature adult now, living independently elsewhere; Nick is a senior at Suffield High (and a catcher on the baseball team).The comfortable Cape Cod, built in 1999, was just right for the family, and they soon finished part of their walk-out basement for a recreation room. It’s also been convenient for Karen’s job at Designs for Health nearby on South Street. Joe is an auto tech specialist for Nissan in Springfield.

When the Kreuzers saw evidence of cracking in their basement walls, they took action, had the material tested, and found that they had a serious problem. So they applied for help, were accepted into the State’s “captive insurance” system, and scheduled for help with the necessary repairs. They were told the work would start this winter, so they researched temporary housing opportunities, but were a bit surprised to be given only four days’ notice to move out on November 17 so the house could be jacked up for the repair project. The work started on the 18th.

Fortunately, Joe and Karen had chosen Candlewood Suites in Windsor Locks; it was convenient, would allow pets, and had space immediately available. Joe, Karen, and Nick shared the one bedroom, and their dog and cat soon became acclimated. It was definitely a tolerable stay.

When interviewed on Sunday, December 12, Joe and Karen were visiting their home on Austin Street, getting it ready for the happy move back soon when some final work on the project is completed. They reported that the house had survived the jacking well, with only a few wall cracks to be repaired. They had arranged for it to be reset two and a half feet higher than its previous grade to correct a drainage problem and reduce the driveway slope; the State won’t be paying for the necessary landscape rework. And refinishing the new basement was not authorized in the State-financed work. That may or may not be a future project for the Kreuzers, whose family needs have changed with time. The State paid the contractors directly for the foundation replacement, but the cost of temporary housing was the family’s responsibility.

When asked for a final comment, Karen Kreuzer said simply and emphatically, “Thank God for the State funding!”

Next Article
Let’s Get Acquainted
Hello old friends and welcome to my new acquaintances! Some of you…