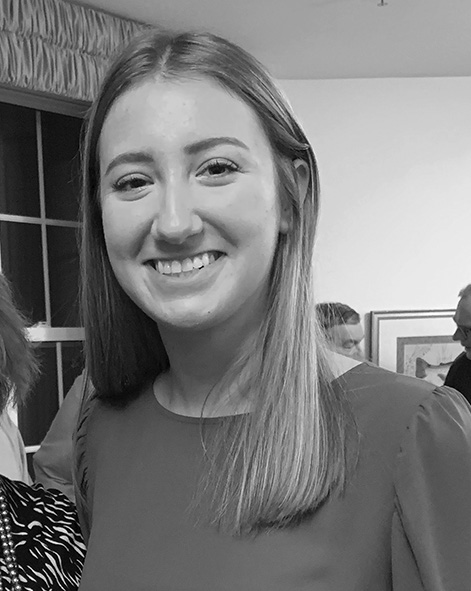 Rotary Student of the Month for November

Congratulations to Eiren Klesczewski who was selected as the Rotary Student of the Month for November!

Eiren is a senior at Suffield High School and has volunteered in several groups throughout her years here at the high school. Eiren is involved with Chick-Fil-A Leader Academy, where she helped organize a Trivia Night to raise money for the Dustin Doyon and Brianna Mailloux Scholarship Fund. This group also organized a movie night for elementary aged children, where they collected socks to donate to those in need for the winter. Eiren is also a member of our Wildcat Advisory Group. WAG students help incoming freshmen get acclimated to the high school by hosting an open house for them during the summer. WAG students also volunteer their time at open house and parent teacher conferences to help parents navigate around the high school. Eiren and her family organized a donation drive at the time when Hurricane Sandy hit where they collected supplies to bring to the victims of Hurricane Sandy.

Eiren has also worked as a soccer referee for the Suffield Soccer Association, worked at a local farm for several years, and currently works in an office at a manufacturing company, where she inspects parts, does data entry and filing and ensures parts are packed and shipped accurately. Well done!

Rotary Student of the Month for December

Anna Blakely was chosen as the Rotary Student of the Month for December. Anna is a senior and an Honors student at Suffield High School and is involved in many extracurricular activities. Anna has been involved in the Chick-Fil-A Leadership Academy, where she was awarded the Chick-Fil-A Leader Academy Scholar in her junior year. She has been a member of WAG (Wildcat Advisory Group) during all four years at SHS. WAG is a group of students who help freshmen make a smooth transition from middle school into high school. WAG students also volunteer their time at open house and parent teacher conferences to help parents navigate around the high school. Anna is also the Varsity Tennis Manager and the Varsity Basketball Manager. She is involved in groups such as High School Reimagine (a group of students who discuss making changes for the better in our school) and Game Changers (a group of students who are trying to spread awareness about abuse). Anna is also a member of the Interact Club and is an Auxiliary Member of Our Lady of Mt. Carmel. Anna has been a member of the Suffield Tennis Team, as well as the Basketball team and was awarded Scholar Athlete.

Anna has volunteered in several out-of- school activities such as the Easter Bunny Lunch at Mt. Carmel, Easter Baskets for Emergency Aid, the Feast of Mt. Carmel, coaching at basketball camp and volunteering at Kent Memorial Library and St. Patrick’s Church. Anna was also a member of the Girl Scouts for many years.

Anna is involved in “Marketing to Manufacturing” a group that she created. From this, Anna is starting a water bottle business. She is learning to make a website and how to work with graphic design. This website will help other students pursue other business ideas. She hopes from this project that other girls will be inspired to try manufacturing.

In Anna’s spare time, she is a Parts Manager at a Boat Marina and also enjoys babysitting.

Congratulations to Anna for receiving the Rotary Student of the Month Award!

Rotary Student of the Month for January

Congratulations to Joseph Puia who was chosen as the Rotary Student of the Month for January!

Joseph is a senior at Suffield High School, an honors student and a member of the National Honor Society and the Spanish Honor Society. Joseph has been involved in football since the sixth grade and is on the Suffield/Windsor Locks Raiders Football Team. Joseph was chosen as the Football Captain in his junior and senior year. He has also been involved in the Suffield Basketball Driveway League throughout his high school years. He was the recipient of the Saint Michael’s College Book Award in his junior year.

In his spare time, you might find Joseph volunteering at the Windsor Locks Fireman’s Carnival as a parking assistant or volunteering at the Freshman Step-up Open House, where he was a “Football Table Coordinator.” In addition, Joseph has volunteered at the Lions Bradley Road Race helping to hand out flyers and direct traffic. Joseph has been a member of the Student Council in his junior and senior year.

Another impressive thing is that he runs his own business called “Puia Paints” where he paints shoes. Joseph said, “I have done a variety of pairs, ranging from tributes to heritage, movie themes like “Toy Story” and the “Joker,” as well as many pairs that are just special to the customer.

Next Article
Suffield High School’s Kindness Crew
Since cancer has affected many of our lives, The Kindness Crew decided…