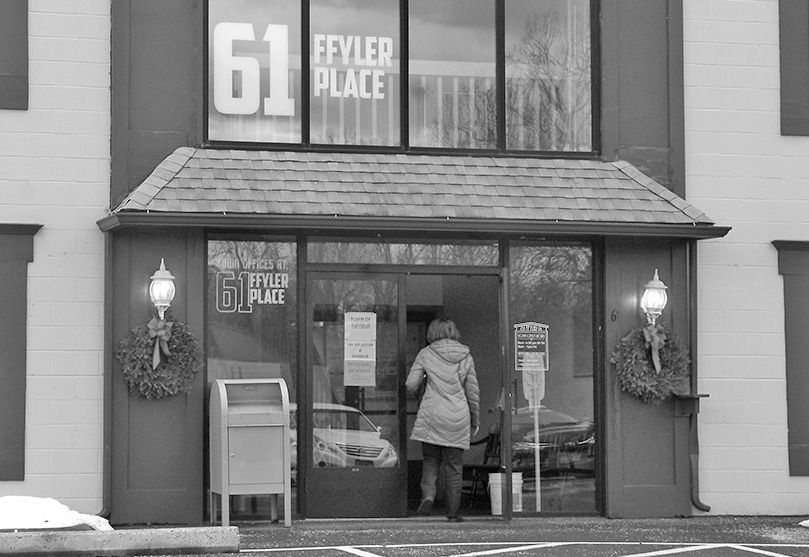 With signage for its new role, and nicely adorned for the holidays, the location of Suffield’s recent temporary library is now accommodating most of the Town Hall administrative departments. Pictured on January 9 this visitor seemed intent on business.

As reported in the First Selectman’s updates to the Board of Selectmen, the project to renovate Suffield’s 58-year-old Town Hall seemed to be moving forward smoothly with expected costs still within the budget authorized. Now Project Manager Gilbane Building has received construction drawings from architects QA&M and has received guaranteed maximum price bids from sub-contractors. As this is to be a Construction Manager at Risk project, if the predicted costs exceed the $5.130 million Town appropriation voted in 2015, the scope of the project must be adjusted to fit, or more funds would need to be authorized.

With nothing that required their attention, the Permanent Building Commission had not met since November 5. But the Commission met on January 16, with First Selectman Melissa Mack present to hear an interior design specialist from QA&M describe potential materials and colors. Then personnel from Gilbane reported the latest cost information, and the news was troubling. The estimated project cost, even after serious value engineering, was about $800,000 higher than had been reported based on design development drawings several months ago and was well beyond the appropriation. First Selectman Mack said Suffield could not now initiate the necessary bond sales, which had been scheduled for February 3 so construction could start in the spring. The meeting adjourned on that note.

The task of emptying the Town Hall was already well along and will continue. It began months ago with house cleaning: every department was required to review years of storage and discard or outplace what they could. The attic had been cleared long before, but had begun to fill again. It was soon emptied.

The first departments to move out were Tax Collector, Assessor, and Registrars. They moved in early December to well-planned quarters at 61 Ffyler Place, where the library had survived for five years. The Town Clerk moved in early January to the same location. There, the land records are available online. Maps and a limited amount of other records are available as well. Birth, death, and marriage records back to 1920 are available; older ones are at the probate office in Windsor Locks. Other old records, not yet scanned and digitized, will be recoverable from off-site secure storage only with considerable difficulty.

The First Selectman’s office and Human Resources plan to move in February back to 230C Mountain Road, where they resided for a number of years until they moved back to the Town Hall over a year ago. They will now be in the southeast corner of 230C, on the first floor. That will empty the Town Hall.

The Public Works Department (two people) will move upstairs at 230C on the east side, freeing space for the First Selectman and Human Resources downstairs. Remaining upstairs there are Planning & Zoning, Conservation, and Engineering. The small conference room at the northeast corner of 230C downstairs will also remain. The Building Department will remain on the west side of 230C, upstairs.

The Finance Department, which moved back to Town Hall a year ago, is scheduled to relocate to the Senior Center in February, occupying the Hanzalek Library in what had once been the original sanctuary of Calvary Episcopal Church. The pews, used in recent years for lectures and meetings, have been removed and set around the perimeter of the Great Room.

Commissions and boards that have been meeting in the lower level conference room at Town Hall have several alternate choices now. When the Town Hall renovations are complete, such meetings will be well accommodated by the new meeting room in the west side of the first floor, where the Town Clerk has been located for many years.