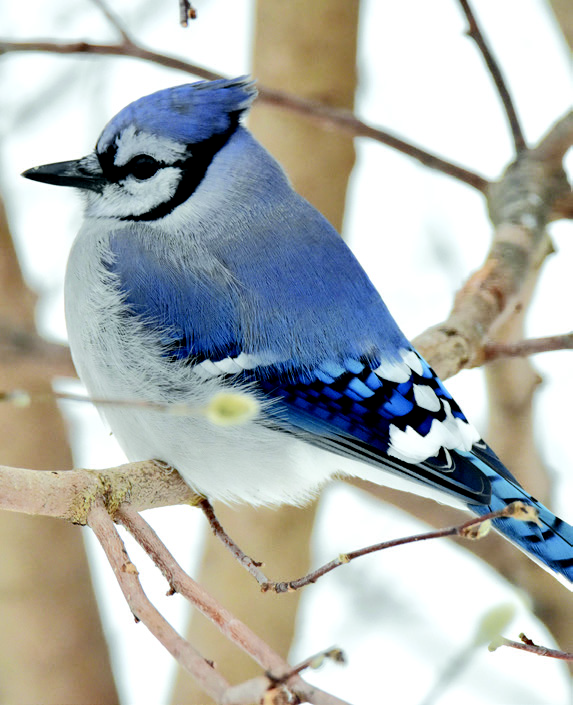 A blue jay provides a welcome flash of cold color in this winter lansdcape.

These wintry days I am dreaming of the ocean. Days with my feet in the sand listening to the lapping of waves and casting my eyes on that big expanse of ocean until it merges with the sky. Naturally the conversation, whether it is just in my head or shared with others, turns to the ocean’s shade of blue. It is easy to draw folks into this discussion and very difficult to reach a consensus. Is the sea royal or navy, topaz, azure or aquamarine? If my inner child jumps into the discussion, it’s the Crayola 64 colors, past and present, that describe it best with indigo, cerulean and cadet blue in the running. My DIY friends lapse into Benjamin Moore lingo describing the ocean. They see it as Athens blue, waterdrop or Indi Go Go. Even with all this blue terminology circulating around in my head, the ocean will have to wait until a warmer day. The closest dot of blue on my horizon is the blue jay. He will have to suffice with his big personality and lovely blue hue.

Blue jays are related to crows. Not surprisingly, they are known for their intelligence and social behavior. The male and female choose wisely and mate for life. They keep tabs on what is going on in the bird world, can mimic other calls and are generally in the thick of things. They eat mostly seeds and insects and are very fond of acorns and will find them and store them for later use. It is thought that blue jays helped to reforest the oak trees here in North America after the glacial periods with leftover stashed acorns. It’s always refreshing to make a case for hoarding! In the spring they make a nest out of bark strips and moss and twigs, usually in the crotch of a tree. The female lays four to six eggs and both parents tend to the hatchlings. They fledge in about three weeks but stay together with their families for the remainder of the summer. There are some blue jays that migrate, but it is a puzzle. Some head south one year and remain in New England the following one. It is a bit of a mystery why they choose to come or go, but being elusive just adds to their appeal. At any rate, there are plenty around during the winter to give me my blue fix.

So, I’ll continue to watch the local blue jays, scrolling through the shades of blue in my head. And, when I do so, it won’t be long before I am reminded of a recent trip to the 911 museum and the time I spent mesmerized by Spencer Finch’s blue wall. There in those hallowed halls, the artist created 2,983 mosaic squares in different shades of blue all representing folks lost on that horrible day. The spectrum of blues is said to be a remembrance of the color of the sky that fateful morning. Each square is a different shade of blue and it’s a powerful image, one which I cannot get out of my head: the sheer number of squares, the range of blues, the sober space in which they hang. When I came home I thought about the color of the sky and what it all meant. I also thought of my days in English class dissecting Stephen Crane’s “Open Boat” and his famous opening line….”None of them knew the color of the sky.” Maybe that was true back in the day for the desperate rowers, heads down in their boat, trying to get to shore .They knew the color of the sea, for sure. But for those of us who took a breath on 9/11, our eyes lifted towards the sky and found it still blue, while our hearts sank.

Next Article
Unique Floral Shop Has New Owner
“Ebullient” is a word that describes Sarah Parlos, the new owner of…