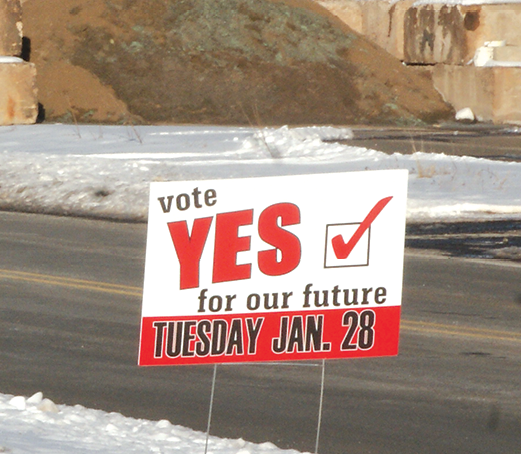 “YES for our future” signs appeared soon after the January 15 Town Meeting.

About a quarter of Suffield’s eligible voters made their choices at the Town referendum on January 28, and they turned down the proposed Town Highway Garage relocation with two resounding NO’s. The vote was 3 to 1 on the first question: to relocate the garage and permit development of its parcel on Ffyler Place, using Tax Increment Financing. The second question was declined even more strongly: a 4 to 1 NO vote rejected buying an existing building at 1160 South Street, renovated for the intended use, for no more than $2.4 M plus the existing highway garage property.

The referendum was the climax of a long effort by the Town administration. First Selectman Melissa Mack called it an economic development effort with the potential of reducing taxes, not just a highway garage issue. Development studies had described the 30-acre Ffyler Place property, across Mountain Road from the former CVS Plaza, as a prime commercial location and warned that no developer would be interested as long as the highway garage was there. The relocation to 1160 South Street was the most recent of at least five proposals considered over the last few years.

The 40-year old building on South Street offered was built as the distribution center for Suffield aircraft parts supplier Adams Aircraft, and various critiques were expressed on its suitability for the proposed highway garage use. Developer Kevin Casey, of Patusan Millennium in Hartford, offered certified engineering reports on how added concrete on the floor would support the weight of the Town trucks, and he described how he could remediate other potential problems. One serious issue was whether the trucks could safely turn to enter the proposed new side garage doors on the narrow lot. Casey said he planned to acquire land from the valet parking next door that would fully solve that problem.

These improvements and other changes satisfied the Boards of Selectmen and Finance, so the proposal was presented at a Town Meeting on January 15, and that meeting adjourned to the January 28 referendum for the Town’s decision.

As reported in the February issue of the Observer, the Town Meeting on January 15, with about 75 citizens present in the SMS auditorium, included major presentations by First Selectman Mack and developer Casey, with support from three dozen PowerPoint slides, whose title slide read, “Unlocking Suffield’s Future.” There were many comments from the audience.

A flurry of roadside signs, email distributions, USPS mailings, and Facebook discussions followed, pro and con. And then came the referendum vote.

Subsequent public comment suggested that there were a number of reasons for the proposal’s rejection, including belief that the proposed garage location was undesirable, concern that the offered building was unsuitable, in spite of the intended renovations, and feelings that the whole plan seemed too full of opportunities to go wrong. On February 5, the Selectmen discussed using the February 25 WPCA revote (required to settle a tie vote for a position on the Suffield sewer commission) as an opportunity to explore popular attitudes about Ffyler Place and the garage relocation. And on February 12 the Selectmen decided to ask February 25 voters whether the Town should explore other ways to relocate the garage from Ffyler Place.

Also, an unrelated question was to be added for votes at the February 25 opportunity. In summary, this question was: Should the 2015 approval and bonding for the Bridge Street School conversion to a Community Center be rescinded? Both questions were discussed at the February 20 Town Meeting called by the Selectmen on February 12; they were then adjourned to the referendum on the 25th.

The Observer’s production schedule does not allow the February 25 results to be published in this issue.