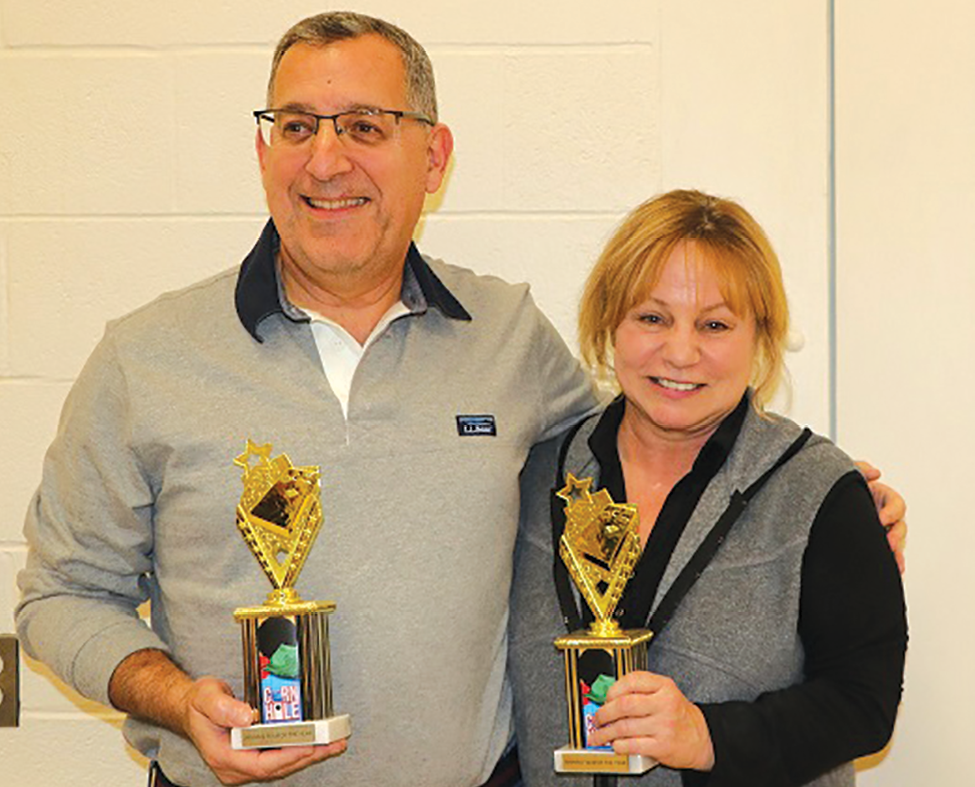 Dave Tarracciano and Jacky Strano of the Knights of Columbus show the trophies their team won, beating Suffield Rotary in their January Cornhole Tournament.

Oh boy! Did we have fun!

Suffield Rotary challenged the Knights of Columbus to a Cornhole Tournament at the end of January. The Knights won, but Suffield Rotary is practicing to regain the trophy. Knights – watch out!

Helping the Community – Service Above Self

Dedication of the Sunrise Park Playscape, donated in large part with funds from Suffield Rotary, is Saturday, April 25.

Suffield Rotary donated $500 to Rotary International’s Polio Fund. The Bill and Melinda Gates Foundation will be matching these contributions $2 for every $1 contributed.

Suffield Rotary is planning an event to celebrate the 350th anniversary of Suffield.

Came to a Recent Meeting

Ron Horn and students David Fitzgerald and Tyler Nardi gave the presentation about The Suffield-Windsor Locks joint robotics team, known as Aces High or Team 176. Many students who join the team have no experience but gain skills over time. Aces High introduces science and technology that positively changes a student’s life as they design and build robots for yearly competitions. Aces High has won the state championship three years in row and has placed in the top five teams in national competitions. In 1999, the team won a world championship.

Heidi Huhn Partain announced that her company, BrightStar Care, is in a new location at 66 North Main Street in the same building as Webster Bank.

Our second annual Wine Tasting Fundraiser will take place at Suffield by the River (7 Canal Road) on Friday, April 24. Doors will open at 7:00 p.m. with event beginning at 7:30 p.m. Tickets sell for $35 apiece and $60 for couples. It will feature a variety of beverages, good food, music, raffle baskets and fun. Funds raised will support the many Rotary International Humanitarian projects. Tickets are available on SuffieldRotary.org and at Windsor Federal bank in Suffield.

Get ready for golf! The 29th Glen T. Packard Golf Tourney is coming on August 14.